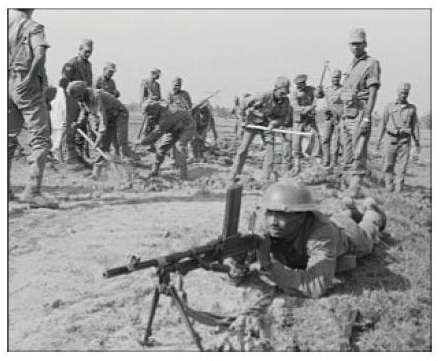 The Indo-Pakistan War of 1971, or the Bangladesh Liberation War, is also referred to as “the Lightning Campaign.” Because, since the beginning of the first direct military confrontation on December 3, 1971, it took only 13 days for the war to end. The war, which saw a well-timed action of forces on the Indian side, ended on December 16, 1971, with Pakistani General Lt Gen AAK Niazi signing the “Instrument of Surrender” in Dhaka in the presence of Indian General Lt Gen JS Aurora. To understand how the war unfolded and how India won it emphatically, it is necessary to understand the chronology of events of this 13-day war. The most important events must be recounted if not all the developments, statements, broadcasts, diplomatic events, military actions, heroic tales and anecdotes. Here are snippets of the war by date from the archives of the Press Information Office, India, and other resources: –

December 4 – In a nationwide broadcast, the Prime Minister announces that Pakistan is launching a full-scale war against India. She said: “Today a war in Bangladesh has turned into a war against India … I have no doubt that by the united will of the people, the gratuitous and unprovoked aggression by Pakistan should be decisively repelled. and final… Aggression must be fought and the people of India will face it with strength, determination, discipline and unity. Pakistan officially declares war on India. In the Ferozepur sector, a Paki brigade, supported by airs, armor and artillery, attacks Indian territory near Hussainiwala. Indian forces repel the attack with heavy losses for the enemy. In the eastern sector, Indian troops entered Bangladesh in several places and, together with Mukti Bahini, liberated many areas. The western and eastern fleets of the Indian Navy set out on a mission to search for and destroy enemy warships and cut the line of maritime communication between West Pakistan and Bangladesh.

December 5 – Indian forces repel Pakistani attacks in the areas of Longewala, Amritsar and Chhamb, Kasba near Poonch. The Indian Navy’s Western Naval Task Force sends two Pakistani destroyers – Khaibar and Shahjahan to the seabed. The task force is also bombing the port facilities in Karachi. In the Bay of Bengal, the Indian Navy knocks out the enemy submarine (Ghazi) and launches attacks on Chittagong and Cox’s Bazar.

December 8 – General SHFJ Manekshaw, Chief of Staff of the Indian Army, calls on the officers and men of the Pakistani occupation forces in Bangladesh to surrender to the Indian Army because of their “desperate position”. India repels another Pakistani attack in the Chhamb area, inflicting massive losses. Indian troops and Mukti Bahini liberate Comilla and Brahmanbaria. The United Nations General Assembly passes a resolution calling on India and Pakistan to cease fire immediately and withdraw their forces to their own territories.

December 9 – The Indian Minister of Defense announced to Parliament the sinking of the largest Pakistani submarine “Ghazi” built by the United States off the coast of Vishakhapatnam on the night of December ¾. Indian troops together with Mukti Bahini liberate Chandpur and Daudkandi. The Western Naval Fleet Task Force bombs the entire Makran coastline from Gwadar to Karachi and sets fire to the vital fuel facility in the port of Karachi.

December 10 – Laksham is released. The Pakistani commander went there with his officers and 416 men. In the Kutch sector, Virawah is captured 10 miles north of Nagarparkar and Vingoor. India guarantees a safe conduct to planes from several countries to evacuate foreign nationals from Karachi, Islamabad and Dhaka.

December 11 – Major General Rao Farman Ali, military adviser to the governor in East Pakistan, calls on UN Secretary-General U Thant to help repatriate West Pakistani troops and civilians and ensure their safety until that the evacuation is organized. However, General Yahya Khan, President of Pakistan, cancels Ali’s message. General SHFJ Manekshaw, head of the Indian army, broadcasts a message to Ali, talks about the futility of resistance and calls for the surrender of the Pakistani occupation forces. Mukti Bahini, together with Indian troops, frees Hilli, Mymensingh, KUshtia and Noakhali. Indian troops repel a Pakistani attack in the Chhamb area.

December 12 – The Indian paratroopers released considerable forces to mount an assault on Dhaka.

December 14 – Dr AM Malik, Governor of East Pakistan, signs his resignation after Indian Air Force strikes left the governor’s house in Dhaka devastated. Other senior officials of the Pakistani administration in East Pakistan (Bangladesh) are resigning from their posts and asking for protection in the neutral zone of the Red Cross. Bogra is released. Brigadier Kader, commander of the Pak infantry brigade, as well as lieutenant-colonels and a major go near Dhaka. Haripur’s oil and gas refinery is captured intact. Jagjivan Ram, Indian Minister of Defense, briefs Parliament on the losses of tanks, planes and warships suffered by the two countries, also gives figures on the losses. The Soviet Union uses its veto for the third time to block the US resolution calling for an immediate Indo-Pakistani ceasefire and troop withdrawal.

December 15 – Lieutenant-General AAK Niazi, commander of the Western Pakistani occupation forces in Dhaka, calls for a ceasefire from the head of the Indian army. In response, General SHFJ Manekshaw ordered him to surrender with the men under his command before 9 a.m. on December 16, 1971. As a pledge of good faith, air action over Dhaka was suspended from 5 p.m. .

December 16 – Indian Prime Minister Indira Gandhi announces that Western Pakistani occupation forces in Bangladesh surrendered unconditionally to Dhaka at 4:31 p.m. It announces a unilateral ceasefire on the Western Front as of 10 pm on December 17, 1971. Lieutenant-General AAK Niazi signs the “Instrument of Surrender” on behalf of the East Pakistan Command. Lieutenant-General Jagjit Singh Aurora, GOC-in-C of Indian and Bangladeshi forces in the Eastern Theater, accepts surrender. Dhaka becomes the free capital of a free country – Bangladesh. (Compiled by Kartik Lokhande) ■