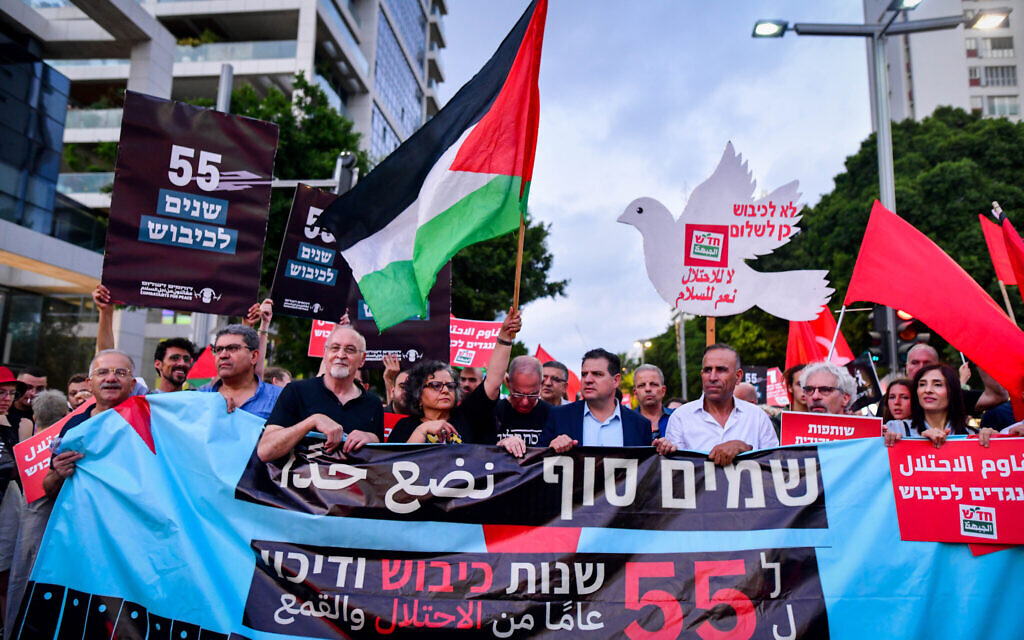 Two women were slightly injured on Saturday evening when an electric scooter driver crashed into a “55 years of occupation” demonstration in Tel Aviv.

The injured protesters were taken to the city’s Ichilov Medical Center for treatment.

The demonstration took place in Habima Square, in the center of the city.

It was not immediately clear if the accident was deliberate and the biker was taken into police custody for questioning, Maariv reported.

Joint List lawmakers denounced the incident as a deliberate attack fueled by recent moves against displaying the Palestinian flag inside Israeli territory.

Palestinian flags were waved during the demonstration in Tel Aviv.

Joint List party leader MK Ayman Odeh and fellow party member MK Aida Touma-Sliman, who were both present at the protest, went to visit the injured women in hospital.

Odeh blamed the incident on “incitement” against the Palestinian flag, and pointed to a bill passed in a preliminary reading by opposition parties in the Knesset earlier this month that aims to ban the flag waving in institutions that receive state funding.

“The vote and incitement against the flag has reached the streets,” Odeh said at the hospital.

“This shocking attack is a direct result of savage incitement against all who oppose occupation and apartheid, and racist laws like the flag law,” Touma-Sliman tweeted, referring to legislation.

Another Joint List member, Ofer Cassif, said, “This is what is caused by the systematic incitement against the Palestinians and the left.

In recent weeks, the Israeli authorities have done everything possible to challenge the hoisting of the Palestinian flag.

Additionally, two Israeli universities have come under fire for allowing the waving of Palestinian flags at campus events.

Earlier this month road safety lobby group Or Yarok reported that in 2021 there had been a 34% increase in the number of crashes reported to police involving electric scooters and an increase in 25% of reported injuries.

Last year, 1,364 people were hospitalized for injuries caused by electric scooters or bicycles, according to the Gerner Institute at Sheba Tel-HaShomer Medical Center, Ynet reported.

Supporting The Times of Israel is not a transaction for an online service, like subscribing to Netflix. The ToI Community is for people like you who care about a common good: to ensure that balanced and responsible coverage of Israel continues to be freely available to millions of people around the world.

Of course, we’ll remove all ads from your page and you’ll have access to great community-only content. But your support gives you something deeper than that: the pride of joining something that really matters.

Join the Times of Israel community Join our community Already a member? Log in to stop seeing this

You are a dedicated reader


We’re really glad you read X Articles from The Times of Israel over the past month.

That’s why we started The Times of Israel ten years ago – to provide discerning readers like you with must-read coverage of Israel and the Jewish world.

So now we have a request. Unlike other media, we don’t have a paywall in place. But since the journalism we do is expensive, we invite readers to whom The Times of Israel has become important to support our work by joining The Times of Israel community.

For just $6 a month, you can help support our quality journalism while benefiting from The Times of Israel WITHOUT ADVERTISINGas well as access Exclusive content only available to members of the Times of Israel community.

Thanks,
David Horovitz, founding editor of The Times of Israel