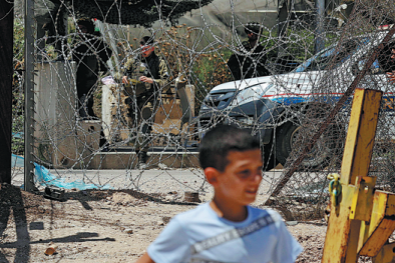 The most rational way out of the Israeli-Palestinian conflict, according to experts

A two-state solution, with the cooperation of the international community, remains the most rational path for Israelis and Palestinians, experts say, after a United Nations-backed investigation blamed Israel for the protracted conflict.

Haydar Oruc, a former researcher at the Center for Middle East Studies in Turkey, said establishing a two-state solution is more difficult now, but not impossible.

“The first condition to revive this solution is to end the occupation and give their land to the Palestinians to establish their sovereign and independent state,” Oruc said, adding that the international community should unite so that both parties make peace on equal and just terms.

The United Nations Independent International Commission of Inquiry into the Occupied Palestinian Territory, including East Jerusalem, and Israel, said in a report released June 7 that Israel’s occupation of Palestinian territory and discrimination against Palestinians are the main root causes of the recurring tensions. and instability in the region. Oruc said no state can ignore international law.

The commission’s report was presented at the 50th session of the UN Human Rights Council in Geneva on June 13.

Ayman Yousef, a professor of international relations at the Arab-American University of Jenin in the West Bank, said the findings of the UN-backed investigation might not matter for the peace process.

He said that “many reports, many decisions and many statements” have already been issued by the UN Security Council or in UN general assemblies, but “they have not been put into effect”. work in the field”.

The findings indicate that past recommendations have “not been implemented in the vast majority of cases”, he said.

Yousef notes that Israel is now “building a new strategy to deal with the Palestinians and the Palestinian issue”, and that this strategy is based on “putting more emphasis on the economic component, economic factors and normalization with Arab countries”.

“Therefore, I believe that economic peace and normalization (of relations with) Arab countries…could be the alternative project to any political solution to the Palestinian issue,” Yousef said.

The commission recognized that “ending the occupation alone will not be enough” and that other measures must be taken to ensure that all peoples in Palestine and Israel can enjoy all their human rights equally and fully.

Nagapushpa Devendra, a West Asia analyst and researcher at the University of Erfurt in Germany, said it was imperative for Israelis and Palestinians to be prepared to resolve internal discord and commit to discussing challenges that stand in the way of the two-state solution.

“For example, he faces major opposition within the Israeli and Palestinian communities. Attempts must be made to address their main concerns and defeat existing opponents in government and public spheres,” Devendra said.

In addition, she said, the two-state solution poses several problems – such as the conditions for the formation of two states, the border, the settlements and the refugee crisis, the visions of the political, military and economic structure new States and the distribution of resources – which “are still unclear”.

She said it is crucial for the two sides to reach a common understanding in order to coexist peacefully, but this cannot happen without a push from the international community.

It is important that “international actors, including Europe, the United States and the UN, play a major role in bringing the two sides together under the same roof to negotiate, however long and difficult the road may be. “, said Devendra.