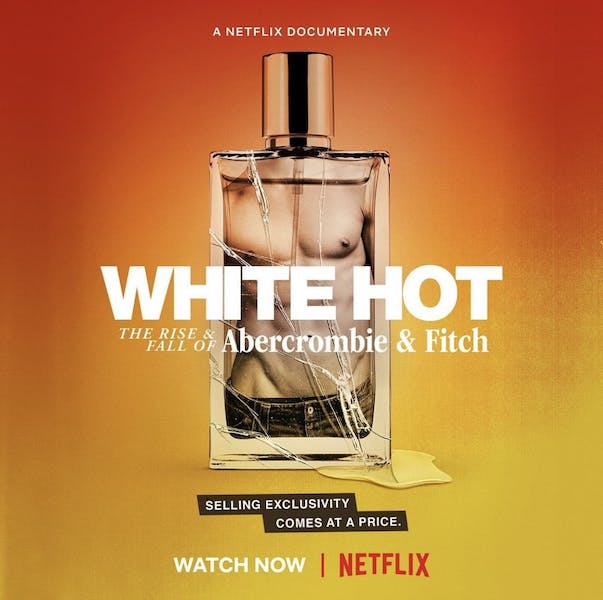 Anyone walking into a mall in the early 2000s would be able to identify an Abercrombie & Fitch store. With explosive club music and overwhelming signature scent, Abercrombie & Fitch had an identifiable aesthetic that catered to one group: the rich, lean, white, cool kids.

Before the company embraced its preppy aesthetic, it started as a men’s sports store. As the fashion industry evolved, the company failed to keep up. In 1977 the company filed for bankruptcy and was owned by various companies before fully reviving under Jeffries in 1992.

Jeffries wanted to keep the roots of the company but combine them with a young and current fashion.

“[Jeffries] found this formula that worked,” New York Times business reporter Sapna Maheshwari said in the Netflix documentary. “He found a way to tie together Abercrombie’s legacy as it was established in 1892, catering to the elite and the privileged and combined it with this very sexy sexual imagery.”

It became the Abercrombie & Fitch image most of us grew up with: half-naked male models wearing ripped jeans with the strip of their boxers peeking through and impossibly thin female models wearing low-rise jeans and tight-fitting “A&F” shirts. .”

Even in my early teens, I knew this marketing was toxic, but that didn’t erase my desire to look like these models.

In a 2006 interview with Salon, Jeffries said gender was crucial to Abercrombie & Fitch’s brand identity.

In the same interview, Jeffries admits that the brand is exclusive, but exclusivity kept the brand relevant during the height of “mall culture” in the early 2000s.

The thought of a successful businessman saying these things in a published interview seems almost unbelievable. However, sixteen years ago, consumers, myself included, didn’t even notice Jeffries’ mission to exclude anyone who wasn’t white, rich, young and thin.

The manager’s handbook included rules such as “A well-groomed, attractive, natural and classic hairstyle is acceptable. Dreadlocks are unacceptable for both men and women”, “brand representatives are required to wear appropriate underwear at all times” and “our store employees are an inspiration to the customer”.

For eleven years, the company operated that way under Jeffries, because who wouldn’t want to work for a brand that capitalizes on “pretty” people. Being hired by Abercrombie & Fitch was like being invited to sit at the “cool table” in high school.

It was not until 2003 that the company experienced its first public scandal. Abercrombie & Fitch has been sued for racial and gender discrimination in the workplace.

Carla Barrientos, one of the plaintiffs named in the lawsuit, had only scheduled nights to clean the store. After asking her manager for more day shifts, she was removed from the schedule. Barrientos was the only black employee in her store.

Jennifer Sheahan, another of the named plaintiffs, said she was fired because she did not look like the blonde models in the posters that covered the store.

“…one of the company people walked around and noticed a bunch of Asians in the store,” Sheahan said in the documentary. “They said, ‘You need more staff that look like that’ and they pointed to a poster of Abercrombie, and it was a Caucasian model.”

Anthony Ocampo tried to get rehired at the store where he previously worked, but couldn’t because his manager said there were too many Filipino employees working in the store.

The lawsuit ended in 2004 with a settlement and a consent decree from the company. Abercrombie & Fitch had to pay several thousand minority and female plaintiffs $40 million, hire 25 diversity recruiters, and create a director of diversity position. They also had to report their progress to a court-appointed monitor for six years, but there were no penalties for missing benchmarks.

I believe the 2004 lawsuit could have been the end of Abercrombie & Fitch, but the court ruling sanctioned the company’s toxic behavior. By not holding Abercrombie & Fitch accountable for missed benchmarks, they excused bullying behavior which, instead of destroying, in turn enabled a billion dollar business.

According to the documentary, Abercrombie & Fitch has repeatedly missed benchmarks and underrepresented minorities in marketing and hiring, but the company has never been found in violation of the consent decree.

In 2015, the company came under fire again after Samantha Elauf claimed she wouldn’t hire him because his headscarf didn’t match the dress code.

Personally, it’s no surprise that the company is falling back into old ways when it has never been reprimanded for its past behavior.

In 2014, Jeffries stepped down as CEO of the company. In an article in the Washington Post, an anonymous source explained that this decision was slow in coming, but “the departure was a joint decision of Jeffries and the board of directors, and unrelated to the controversial comments that Jeffries had made in the past. “.

If there was to be a future for Abercrombie & Fitch in today’s fashion industry, Jeffries would have been forced to quit, and I think he knew that in 2014 and took it upon himself to leave.

In 2017, Fran Horowitz took over the business and pledged to rebrand Abercrombie & Fitch to include everyone.

Today, the Abercrombie & Fitch website includes models of different heights, races and sexual orientations, but why did it take until 2017, just four years ago, to come to this? ?

It’s taken far too long for the company to increase its representation when millions of other brands have been doing it for years.

It tires me to support a company that still has some of the same people who served under Jeffries in the boardrooms to make decisions.

For me to feel more comfortable supporting the brand, I need to see the same dedication Abercrombie & Fitch had to marketing for “cool kids” applied to diversity and representation.

As a billion dollar company, Abercrombie & Fitch is an example of the questionable ethics of the retail industry.

In the documentary, Robin Givhan, a journalist with the Washington Post, explains that Abercrombie & Fitch is just one example of fashion brands marketing an unrealistic cliché of “beauty”, and warns other brands against following a similar path.