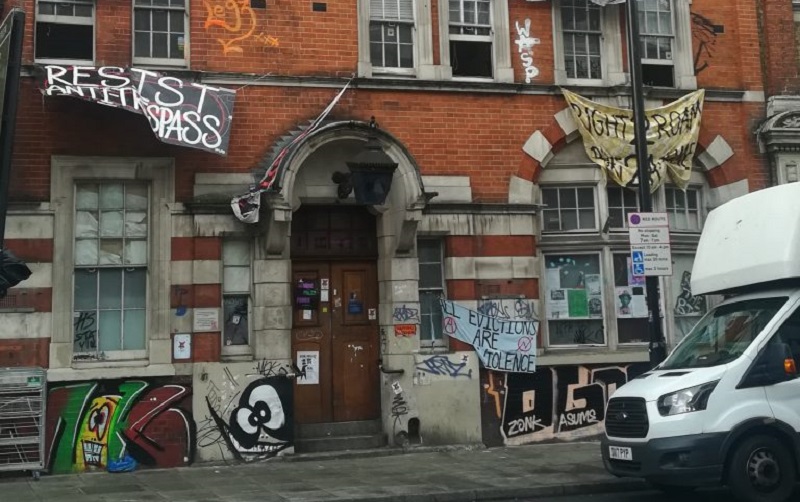 A group of activists who occupied a former unused police station in Camberwell in July protesting the new Police, Crime, Sentencing and Courts Bill (PCSC) were kicked out today.

The group, who call themselves Serious Annoyance, moved into the post after being occupied and later expelled from another unused police station on Cavendish Road in Clapham earlier this year.

In a statement they hung up on the door of Camberwell station, the group said they “will not accept increased police powers that effectively ban protests and criminalize trespassing” and will continue. to fight against the bill and its criminalization of people’s democracy rights.

The PCSC bill, which passed its third reading in parliament last month with a majority of 100, has been widely criticized.

Aeon, a member of Serious Annoyance, said their ultimate goal was to raise awareness in the community about the destructive role of the police if the Police Bill were to be successfully passed in Parliament.

Aeon also pointed out that the group has taken steps to support all those in need, be they protesters, the homeless, refugees and migrants threatened with deportation, or Roma and Gypsy communities. Travelers who could face criminal charges for having stayed on earth without permission.

Aeon said, â€œThese are things you can’t read in the mainstream media.

“We are here to protect the right to protest, to support the preservation of an ancient and nomadic way of life that is disappearing, and to raise awareness of social injustice.”

During their occupation, Serious Annoyance opened the doors of the police station to the community on several occasions, inviting them to participate in workshops, art exhibitions hosted by local artists, discussions and music sessions in the goal of transforming the abandoned building into a community center and encouraging community dialogue.

The former police station, previously owned by the Mayor’s Office for Police and Crime (MOPAC), stopped using its reception desk in 2013 and was consequently sold to a private company called MJW13.

Serious Annoyance received an interim possession order (IPO) on July 21 after the police station’s water supply was cut off in a heatwave in south-eastern England.

The group called the move a public scandal, saying it put their health and safety at great risk.

Aeon described the difficulty of trying to keep the building clean without any access to water and expressed gratitude to the local shops and neighbors who have provided food and water for the group since their stay began. .

An unlicensed local owner said he was shocked the building’s water supply was cut off during a heat wave, although he was unwilling to comment on the occupancy policy.

The store owner said: “They are first and foremost humans.”

Neighborhood Inspector Tom Cornish said: “The building is no longer owned by the Metropolitan Police Department and the current private sector owners have taken the necessary legal steps to evict those who occupy the building.”

The squat has a long history in the UK, both as a means of protest and as a solution to housing crises – often providing shelter to vulnerable members of society.

In 2011, the government criminalized squatting in residential buildings.

Serious Annoyance expressed concern over the growing homelessness crisis in London and said the abandoned police station could be turned into affordable housing or used by the community as a hub.

Aeon said, “The building should not be turned into unaffordable housing or something the community cannot use.”

MJW13 declined to comment on the South West Londoner.

Shaggy says Spice is now “on track to greatness” – DancehallMag