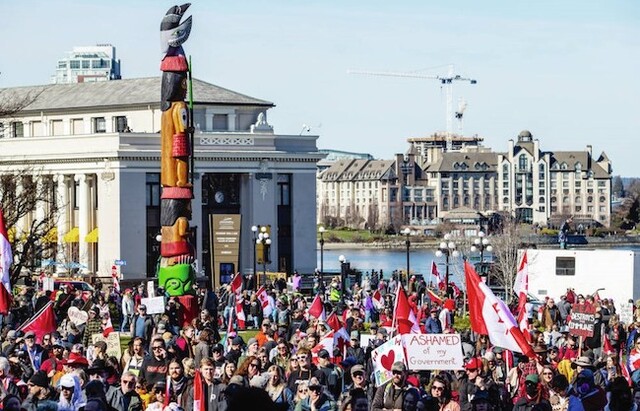 BC solicitor general says lawful protest is part of a free and democratic society, but occupations are not as province monitors convoy of trucks heading to Victoria to protest vaccine and mask mandates .

The Victoria Police Service and the province are monitoring the situation, said BC Solicitor General and Public Safety Minister Mike Farnworth. As with previous protests, police will respond as needed to ensure protests remain peaceful, he said.

“Legal protest is allowed in this country – it’s part of a free and democratic society – occupations are not,” Farnworth said.

James Bauder, one of the founders of the ‘freedom convoy’ that occupied Ottawa for three weeks, said in a video posted on social media that a convoy of trucks was heading for Victoria on Monday and planned to stay there two to three months. .

Bauder said the occupation could include 500 to 1,000 vehicles, and that British Columbia is targeted as one of the last jurisdictions to still have vaccine and indoor mask requirements. Fundraisers are taking place in Canada and the United States, he said.

The Clerk’s Office confirmed that the Legislative Assembly was also monitoring the situation and working with its security partners, including Victoria Police.

Provincial health officer Dr Bonnie Henry is due to provide an update on pandemic restrictions today and has strongly suggested that mandates for masks and vaccines will soon end.

Jeff Bray, executive director of the Downtown Victoria Business Association, said if the mask mandate is dropped, the protest plan will be moot. In the meantime, the members of the association are adopting a wait-and-see approach. “I think if we start to see trucks lined up in Tsawwassen and Horseshoe Bay in the hundreds, we might have a concern.”

Farnworth said B.C. has made it clear that the province makes its decisions on health measures based on science and advice from the provincial health officer. “We don’t make our decisions based on threats or crowd rules.”

On Wednesday, Victoria Police issued a statement saying that police, including officers from the Traffic Section and the Greater Victoria Integrated Public Safety Unit, will continue to respond to protests in the legislative area as they do. have been for the past seven weeks. The department noted that while recent weekend protests have caused disruption and noise, they have not included the occupation of public or private spaces or serious property damage.

But some BC Ferries workers are worried about the prospect of a convoy heading west. BC Ferry and Marine Workers Union President Eric McNeely said Wednesday that his members had made contact with the convoy. He hopes to have discussions this week with BC Ferries officials about what kind of support might be available to members in anticipation of passengers who don’t want to comply with mask rules in terminals and on ships.

Passengers must wear masks at BC Ferries terminals and on board, except when eating and drinking. “I understand the reason they’re going to Victoria is that they don’t like mandates and you could certainly argue that mask mandates fall under that.”

McNeely said there were fewer crew members available to deal with the clashes than there have been in the past. In September, BC Ferries spokeswoman Deborah Marshall said that under the Canada Shipping Act, the organization has the right to deny service to those who do not follow crew instructions. ships.