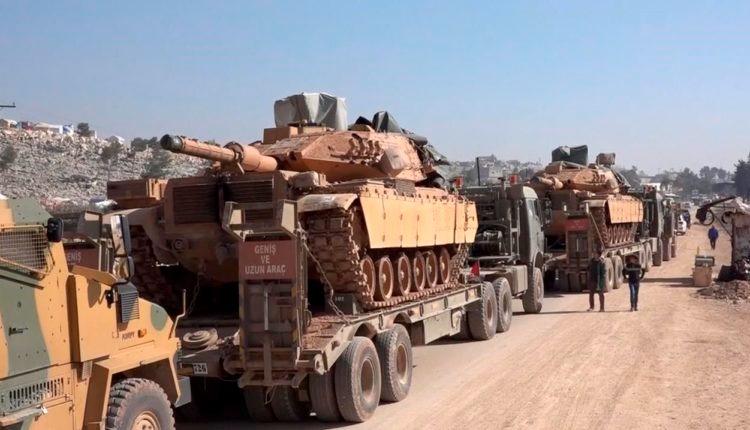 The Syrian Observatory said that the Turkish occupation forces established a new military point in the town of Afes near the town of Saraqib and the M4 motorway, east of Idlib, where the new point contains two tanks, 4 personnel carriers, 3 armored vehicles and nearly 50 soldiers.

According to the Observatory, this point came after messages sent by Russia to Turkey previously to evacuate Turkish points in the area between the cities of Saraqib and Idlib, adjacent to the M4 motorway, east of Idlib.

This coincides with the arrival of military convoys of government forces from Damascus in the city of Saraqib, after which the Turkish occupation was reinforced with tanks and armored vehicles on all of the contact lines surrounding the city of Saraqib. , Jabal al-Zawiya and the western campaign of Aleppo and raising the full readiness of the soldiers with their equipment.

SOHR today monitored the entry of a new convoy of Turkish occupation forces into the so-called de-escalation zone, where more than 100 vehicles, including armored vehicles, personnel carriers and Trucks loaded with military and logistical equipment entered the Kafr Losin border post with Iskenderun, north of Idlib, and headed for the occupation military points in the southern sector of the Idlib countryside.

These developments indicate that Russia and Turkey failed in recent talks in Sochi to resolve the Idlib complex, in particular the opening of the international M4 road.

After these talks, Russia and Damascus demanded that Turkey withdraw from Idlib. Damascus Foreign Minister Faisal Miqdad said today it is time for Turkey to leave northwestern Syria and did not address Turkey’s occupation of other parts of the country. northeastern Syria.

Despite the mutual reinforcements and escalation between the two sides, things are not expected to end in a direct confrontation. Rather, it is possible that this escalation is the start of a future understanding between the two parties, and this is what Miqdad said in his speech today, in which he said: â€œIt is time that Turkey withdraws from the north. the western part of Syria â€, and thatâ€œ this would allow a solution guaranteeing normal relations between Syria and Turkey after the end of this occupation â€.

How to stand out in a new job