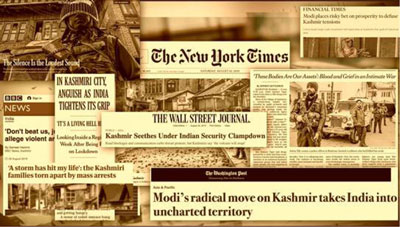 In occupied Indian Kashmir, the media have come under fire for several years. In addition to Indian government control over the communication process, unwanted and unwarranted restrictions on the media such as surveillance, formal / informal investigations, harassment, intimidation, restrictions in all information gathering processes have severely hampered journalistic activities in the region in addition to undermining the role of free media.

With these restrictions in place, the free media in occupied Kashmir became toothless and virtually dysfunctional in the sense that they were totally incapable of reporting the truth.

Rather than discuss the most pressing issues, newspapers published in the Kashmir Valley have been deprived of an editorial voice.

The prominent writers and regular columnists who have written regularly on the Kashmir question have been completely silenced.

The Indian state has directly pressured the print and local media to cover up stories of police, military and paramilitary use of disproportionate force against protesters and restrict freedoms expression and expression.

This enforced silence created a sort of vacuum which was then filled by social media, which provided marginalized Kashmiris with the access and space they were denied in mainstream media.

Young people educated inside and outside Kashmir have found it a unique opportunity to engage with digital platforms to counter the concocted and baseless Indian narratives about Kashmir.

Sadly, in the aftermath of August 5, 2019, Kashmiri social media users inside and outside Kashmir were denied and denied the right to express their voices on digital platforms, the only space where Kashmiris felt free to express themselves. .

How the voices of Kashmir have been silenced on social media, how marginalized Kashmiris have been rendered speechless and how the visibility of the Kashmir issue on the international stage has been brutally suppressed, how the accounts of Kashmir users have been deactivated, suspended and permanently deleted / deleted on The Fragile Bases of Stand-with-Kashmir (SWK), a New York-based non-profit non-profit organization, in its recently released report, uncovers the truth behind the digital headquarters and its devastating effects on the Kashmiris and their case for the right to self-determination.

The first report of its kind also gives an in-depth look at the profound damage that results when companies impose digital silence on Kashmiris.

It provides a comprehensive analysis of the methodology that the Indian apartheid regime has adapted to allow complete silence on Kashmir in the state of Jammu and Kashmir and beyond.

And how social media companies have violated their own publicly reiterated commitments to international standards of free speech.

This report also shatters the myth that social media is a staunch defender of free speech, empowering people deprived of their civil rights to take action by providing them with a global megaphone with which to speak directly to the world.

Shedding light on how social media silenced Kashmiri voices, the report, while citing the 2008, 2009, 2010 and 2016 summer uprisings in Kashmir, shows how the autocratic Indian government centralized information and created communication platforms to monitor Kashmir social media users. to ensure full control and censorship of their speech.

Using both qualitative and quantitative methods, the Stand-With-Kashmir reports based on online polls, interviews, detailed survey tools created with a set of questions about the censorship method employed by the platforms and pre-existing media reports; and human rights documentation of the censorship experienced by Kashmiris in the digital space.

Based on these experiences, the Stand-with-Kashmir team was able to produce this comprehensive document that unveils the dubious and suspicious role digital platforms they have played in helping the Indian fascist regime restrict freedoms of speech and freedom. expression of the Kashmiris and suppress their political aspirations during the tumultuous time when the entire Kashmir valley was turned into an information black hole for the rest of the world by imposing a digital siege that lasted for more than 14 months.

Without mincing words, the report says companies are siding with India’s removal of digital rights from Kashmir, including the government’s blockade of internet and telecommunications access in the region.