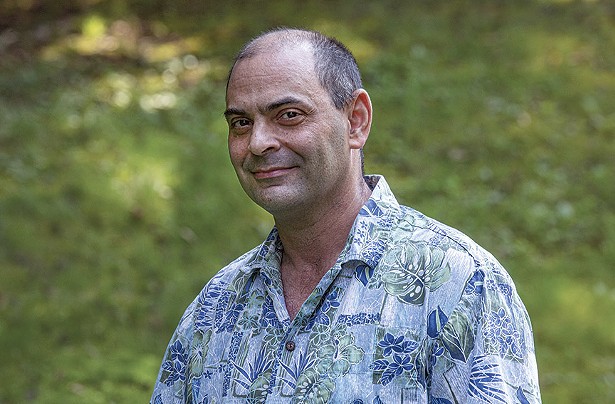 For 22 years Peter Solomon has been the jazz voice of local public radio. For two, then three hours each evening, his show featured long, chronologically varied stretches of improvised music. In infrequent pauses, he identified the pieces and provided polite, concise context drawn from a mountain of historical knowledge. His departure for another NPR affiliate in Salisbury, Maryland, marks the end of an era which, although quietly erased, deserves to be noted.

My first clear memory of the off-air Solomon was in the back room of the old Bogart, then a venerable performance space, since renamed several times. He joined me at a small table where I was trying to sketch out ideas for a business proposal in a pocket notebook. Then he suggested that we try to remember the names of the trombonists who were on the early Blue Note jazz records. I was first stunned and then impressed when he picked up the notebook and filled out page after page with the names of great and obscure artists.

Solomon started out as a trombonist and was admitted to North Texas University’s inaugural jazz program. As a group more than a solo vehicle, his instrument opened a window into the entire history of the form. â€œI loved the early years, the personality of these early trombonists. I could identify several with a single note. Once modern jazz appeared, everyone sounded like JJ Johnson. As jazz has taken hold in schools, there is even more similarity. The casual person transcends, but it is rare.

Solomon was not among the transcendent.

â€œI dropped out of the jazz program at the end of my second year,â€ he recalls. â€œI hated improvisation lessons. Not because there was something wrong with them, it was me. I couldn’t remember a tune to save my life. I remember all the musicians who played in each session, but I can’t remember what comes after the 7th B flat chord in the 4th measure.

He started working at the school’s radio station, earned a Bachelor of Arts degree, and immediately landed his first job at a branch in Southeast Kansas.

When the position in Richmond opened, Solomon applied.

â€œI opened an atlas and saw the river, the mountains and the ocean nearby, and a few hundred thousand people,â€ he says. â€œThe job description said, ‘Cultural opportunities abound.’ With its vibrant arts and music scene, Richmond has so much to do. “

Playing the trombone has opened many doors. â€œI’m not an outgoing person, but with music you quickly make friends,â€ says Solomon. â€œThe first person who took me was singer Mary Elizabeth Ayling, who plays Emme St. James. I surrounded myself with people who were better than me, sitting with Roger Carroll, Johnny Hott, Debo Dabney. I audited saxophonist Skip Gailes’ VCU improv class and had a regular gig with Alan Parker at Crossroads. I used to joke that we scared the lunch crowd away.

But for the most part, his life was centered around radio. He has reported on local artists, interviewed national artists like Branford Marsalis and Christian McBride when they came to the Modlin Center. When Story Corps arrived in town, he learned the art of reducing a 45-minute unstructured conversation to a three-minute uncommented play. And when the National Folk Festival came to town, it pioneered local coverage, creating content to bridge the gaps between live performances.

“No one goes to college thinking, ‘I’m going to get into jazz radio,'” says Solomon.

His well-honed skills have deep roots. When he was 16 and just starting out in jazz, his mentor was radio host Larry Morrissey of Charleston, South Carilina. â€œMy dad would drive me 60 miles so I could bring my records, play them on the air. I had my approach from him.

â€œIt’s not about me – it’s about the music. There is never a reason to continue for more than 90 seconds. I am not targeting jazz fans. They can go through their record collection to hear something abstract and uplifting like Sun Ra. My job is to hold the attention of the layman.

Solomon may have disappeared from the nightly shows, but stepping aside to let the music shine has always been an on the way out.

Peter McElhinney is the jazz critic for Style Weekly and a contributing arts and culture writer.