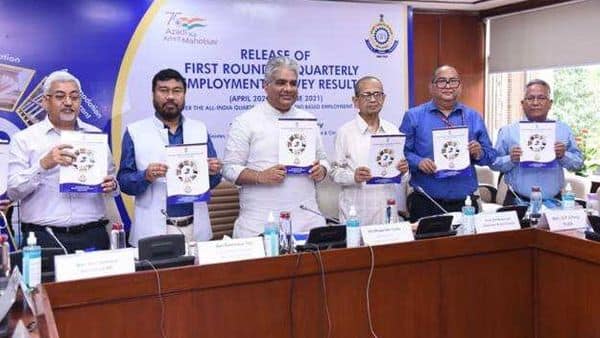 The revamped Quarterly Employment Survey (QES) for the months of April to June indicated that the estimated total employment in the nine sectors selected from the first round of QES was 3 crore and 8 lakhs, or a growth rate of 29% out of a total of 2.3 crore reported in the Sixth Economic Census (EC). The census covered the period from January 2013 to April 2014.

The nine sectors selected for the survey are manufacturing, construction, trade, transport, education, health, accommodation and food services, IT / BPO and financial services, accounting for the majority of the total employment in non-agricultural establishments.

â€œOf the total estimated employment in the nine selected sectors, manufacturing represents nearly 41%, followed by education with 22% and health 8%. Commerce as well as IT / BPO each hired 7% of the total estimated number of workers, â€Labor and Employment Minister Bhupender Yadav said during the QES publication on Monday.

Here are the main highlights of QES:

– According to the report, the most impressive growth of 152% was recorded in the IT / BPO sector, while the growth rates in healthcare are 77%, in education it is 39%, in manufacturing is 22%, in transport it is 68% and in construction it is 42%.

-However, employment in commerce fell by 25% and in accommodation and food services, the decline was 13%. Financial services saw an employment growth rate of 48%.

-The overall participation of female workers was 29%, slightly lower than the 31% reported during the 6th CE.

-Only 9% of establishments (with at least 10 workers) were not registered with any authority or under any law. While 26% of all establishments were registered under the Companies Act with 71% computer / BPO registration, 58% construction registration, 46% manufacturing, 42% transportation, 35% commerce and 28% in financial services.

– About 18% of establishments offer qualifying training on the job.

The AQEES has two components, the quarterly employment survey (EQE) and the area survey of establishments (AFES). QES was launched to compile relevant data from about 12,000 establishments selected through a sampling plan to represent each of the nine sectors within each State / Union Territory, as well as each size class. (range of number of workers) within each sector-State / UTAH.

The new QES was launched today after the previous such survey was suspended in 2018. The new QES has another sector added – financial services – compared to the previous one.