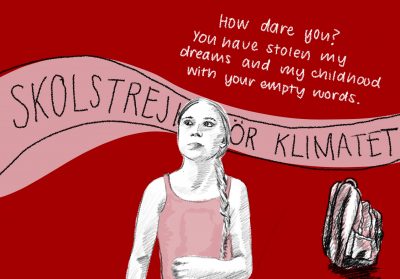 A recent survey of 2,000 UK parents in 2021 found that two-thirds of parents want their children to follow in the footsteps of climate change activist Greta Thunberg and become ‘eco-warriors’.

On August 20, 2018, Thunberg, 16, created a moment of notoriety when she skipped school to sit outside the Swedish Parliament with a sign that read “Skolstrejk fÃ¶r Klimatet “, translated into English as” School Strike for Climate “.

Thunberg sat down in protest throughout the school day, from 8:30 a.m. to 3 p.m. Thunberg was sending a message: The climate crisis is such a dire emergency that she has to sacrifice her education to deal with it.

What good is education if the world is on fire? From that day forward, Thunberg continued to skip school to protest the government’s inaction, but she was never alone again. People saw her on Twitter and joined the movement.

Today, she heads a student-run organization called Fridays for Future. The premise of this organization is sacrifice in return for militant progress – sacrifice to send a message. Thunberg and thousands of other students will “skip school” on Friday in protest against climate change.

Is Thunberg’s life ambitious? Should we follow in his footsteps?

The sacrifice in activism is not a one-size-fits-all idea. Gandhi starved himself to protest the oppression of India’s poorest classes. Blacks living in Montgomery walked eight miles to work and back instead of taking the bus to protest segregation in the 1950s. In 2020, WNBA star Maya Moore put her career on hold to protest against segregation the imprisonment of an innocent man. It’s not a one-size-fits-all idea, but is it the right one? What do we say about human society that we have to sacrifice our necessities for others to listen to us?

The sacrifice in activism plays on the heartstrings of humanity. It begs others to empathize and change their habits accordingly. Yet the sacrifice in activism means that people who seek to create positive change must suffer to do so. It doesn’t suit me that this is the way change is achieved in our society. When I look at Thunberg’s progress as a climate change activist, I admire her – and I suffer for her. I guess that’s the point.

The key to Thunberg’s climate change activism is not that she sacrificed her education to send a message, but rather that she felt like she had no other choice, and she was incredibly angry about it. In her 2019 speech to the United Nations, she accused the audience:

“How dare you? You stole my dreams and my childhood with your empty words.

In that address, Thunberg hinted that she had no choice but to participate in activism, thereby sacrificing her “dreams and childhood.” The “empty words” here refer to the empty promises of the United Nations to fight against climate change.

She communicates that it is the fault of world leaders and previous generations that climate change is an unstoppable force. She expresses her frustration at even being at the UN, telling them about climate change, and emphasizes the fact that she “shouldn’t be here”.

Thunberg’s sacrifice is inspiring in his bravery but tragic in its necessity. The drama resides here when a child had to put aside her education to tackle climate change.

No child should have to support such a weight. Instead of just applauding Thunberg, we should analyze the conditions that shaped his activism.