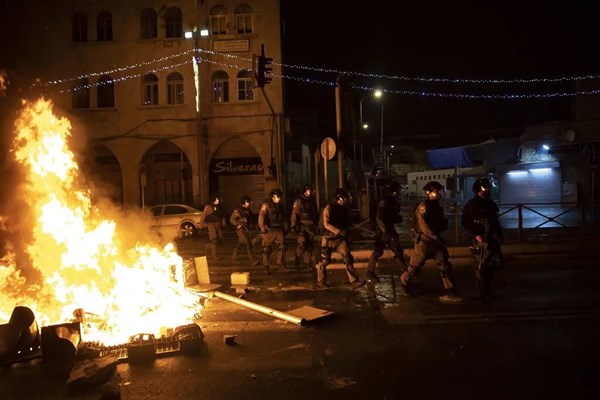 Israeli occupying forces storm the occupied city of Nablus in the West Bank, carrying out a large-scale aggression against the Palestinian people.

Israeli occupying forces stormed the West Bank city of Nablus in occupied Palestine on Tuesday, carrying out a series of assaults unprecedented in recent years.

Palestinian media reported that Palestinian security forces “discovered an Israeli occupation army special force as they attempted to storm the city, which resulted in an armed confrontation.”

Palestinian media reported that residents and security forces managed to thwart the Israeli special force’s attempt to infiltrate the Old City of Nablus and injured some of its operatives, prompting the army to busy launching a rapid and concentrated attack with heavy fire.

The martyr Hamdi Sharaf
Martyr Ali Antar
Those who were martyred by the bullets of #Israeli the occupying army just before during the clashes #Nablus
#Recent news#israelcrimes#IsraeliTerrorism #Palestine #عرين_الأسود #نابلس#فلسطين pic.twitter.com/wD3tohIw9t

Amid rampant criminality led by the Israeli occupation, residents of Nablus took to the streets to offer support to Palestinian security forces and freedom fighters as IOF hysterically opened fire on civilians in the streets, Al Mayadeenreported the correspondent of.

Our correspondent added that mass rallies were held in Ramallah and Dheisheh camp, Beit Lahm, in support of the Resistance and freedom fighters, with Palestinians pouring into the area from various towns in the occupied West Bank.

Keep your eyes on what is happening in Nablus, occupied Palestine.#Nablus#نابلس pic.twitter.com/xQMZgEwTCB

The Israeli occupation air force reportedly carried out an airstrike that targeted a civilian vehicle in the occupied West Bank, according to Palestinian media. The vehicle caught fire and Palestinians rushed to the scene to try to save the passengers.

🚨 The Israeli Air Force hit a Palestinian car and there are several martyrs.#IsraeliTerrorism #Nablus #نابلس pic.twitter.com/FvvVE0oM5a

The violent storming led to clashes between the occupying forces and Palestinians who faced encroachment and aggression.

“The brave freedom fighters of our people, the Al-Quds Brigades, the Al-Aqsa Brigades, the Ezzeddine Al-Qassam Brigades and the Den of Lions will not allow the occupation to violate our cities,” Ezzeddine added. .

The PIJ spokesman also called on the Palestinian people to take to the streets and confront the Israeli occupation “to prove that we are one people and one resistance”.

“We call on the honorable security forces to defend their people with all the means at their disposal,” the Popular Front for the Liberation of Palestine (PFLP) said.

For its part, the Palestinian presidency stressed: “The aggression carried out against the city of Nablus is a war crime.