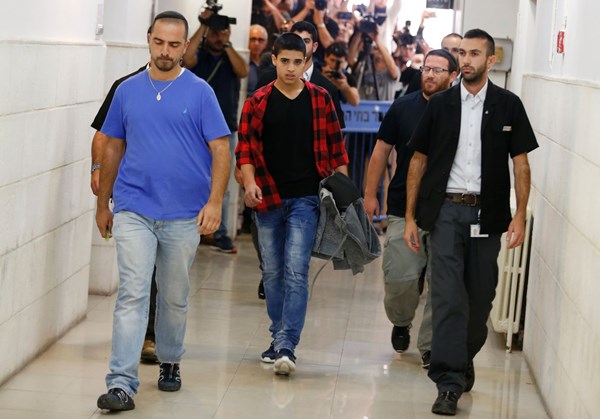 The Israeli occupation continues to postpone the release of prisoner Ahmad Manasra who was only 13 years old when he was arrested on false charges.

The Israeli occupation court in Beer Al Sabe on Tuesday extended the solitary confinement of prisoner Ahmad Manasra for another six months, despite his difficult physical and mental health.

The Waed Association for Prisoners said the decision of the occupation court is an organized Zionist crime that requires immediate action by international human rights institutions, as Manasra suffers from a serious mental health problem due to of his continued isolation for almost a year.

The association called for a broad campaign of popular and international solidarity to save Manasra from what is being plotted against him, warning of the consequences of the Israeli decision, which will only aggravate Manasra’s state of health which was arrested when he was only 13 years old. .

Lawyer Khaled Zabarqa says the Israeli occupation transferred Manasra to the solitary confinement section of the ‘Hashikma’ prison, as he demanded his immediate release due to his deteriorating health condition inside from jail.

Amnesty calls for the immediate release of Ahmad Manasra

“It is outrageous that the Israeli authorities have renewed Ahmad Manasra’s spell in solitary confinement. To continue to detain Ahmad Manasra in such inhumane conditions is an act of callous injustice. Ahmad has been diagnosed with schizophrenia and is severely depressed,” she said.

“Ahmad Manasra was only 13 when he was arrested. The decision to detain him should always have been a measure of last resort and for the shortest possible time,” Morayef said.

The director warned that Manasra had become a shadow of himself and threatened to kill himself. “The Israeli authorities must immediately reverse their decision to renew his solitary confinement and release him as a matter of urgency,” she stressed.

It should be noted that at the end of June, Al Mayadeen The correspondent reported that the Israeli occupation court rejected a request for the early release of Manasra, 20, despite his deteriorating health and psychological condition.

Our correspondent had reported that a parole board of the Israeli occupation had qualified the case of the Palestinian prisoner as “terrorism”.

Israeli courts have for months blocked the release of #AhmadManasra solitary confinement. pic.twitter.com/056iLUCMUL

Manasra was only 13 when the Israeli occupation arrested him on false charges. He has been in solitary confinement since early November 2021.

He has been diagnosed with schizophrenia, suffers from psychotic delusions and is severely depressed with suicidal thoughts.

This is #AhmadManasra after 7 years in Israeli occupation prisons.
He was 13 years old when he was illegally arrested and deprived of his most basic rights. Today, Ahmad’s reappearance is a stark reminder that “Israel” not only steals land, but also #Palestinians‘ childhood. pic.twitter.com/qWUaB2L0qR

Who is Ahmad Manasra?

Born on January 22, 2002 in occupied Al-Quds, Ahmad Manasra is part of a family of ten.

With the start of the popular uprising in 2015, arrests of children in occupied Al-Quds increased and were accompanied by systematic abuse and torture.

On October 12, 2015, Ahmad and his cousin Hassan – who was martyred that day – were subjected to brutal abuse by Israeli occupation forces and settlers.

That day marked a turning point in Ahmad’s life. As a result of his arrest, interrogation and physical and psychological torture, even while receiving treatment in hospital, he suffered from a fractured skull and serious health problems.

Ahmad was only 13 when he was imprisoned and tortured by Israeli authorities.

He has been languishing in prison for 7 years now in deteriorating mental conditions #FreeAhmadManasra pic.twitter.com/iD7welh9Ms

After several sessions, the Israeli occupation court issued a verdict of 12 years in prison against Ahmad and compensation of 180,000 shekels. The sentence was reduced to nine and a half years in 2017.

Prior to his transfer to prison, the Israeli occupation authorities detained Ahmad for two years in a special institution for minors under difficult and harsh conditions, then transferred him to “Megiddo” prison when he was 14 years old.

No Evidence of Moral License in a Lab Bribe Task