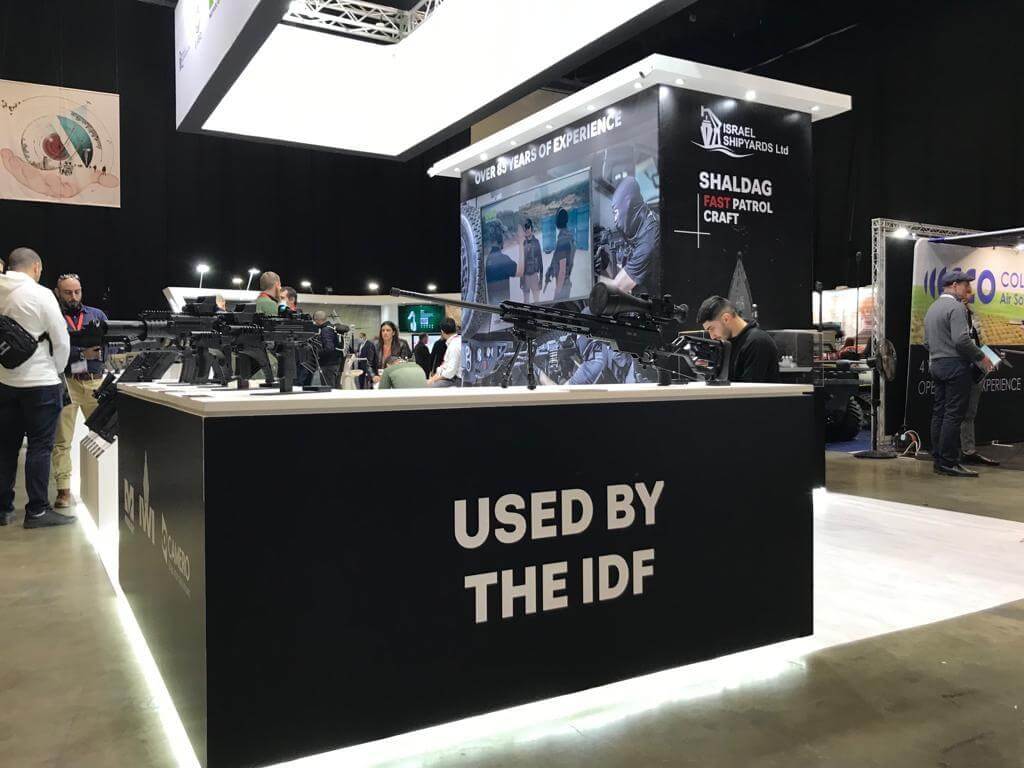 This year’s Israeli arms exhibition, ISDEF2022, once again hosted delegations from various countries that are notorious for serious human rights abuses. They came to examine a wide range of weapons and technologies, including some widely used against the Palestinian population, amid the war raging in Europe. This industry is an inseparable part of Israel’s position as a colonialist militarist regime, with the investment of around 130 countries and the active support of the United States and the EU. As long as Israel’s economic base is its military and security industry, the continued occupation of Palestine, as well as the weaponization of conflicts, borders and oppressive regimes, will remain in Israel’s interests.

ISDEF2022 was an international festival of Israel’s arms exports, attended by official delegations from around the world, such as Ghana, Kenya, Zambia, Uganda, Philippines, Greece, Morocco, Kosovo, Bosnia, Bahrain, Liberia, Nigeria, South Korea. , European and North American countries and more. This list of countries includes those which, according to reports by Amnesty International and Human Rights Watch, have consistently committed human rights violations. A delegation from Belarus, which is currently participating in the war against Ukraine, was also present.

Israel is the 8th largest arms exporter in the world, but by population size it takes first place; it has extensive and long-standing military relations with some 130 countries that have invested in Israel’s military industry through import, export, training and other means, over the past decades. Some of these countries, such as Myanmar and South Sudan, are under arms embargo by a number of Western countries, due to the serious human rights violations and crimes against humanity they commit. . Since Israeli arms export laws do not impose any limitations on sales for human rights violations, Israeli companies can legally export arms and computer technology to these countries.

But this is not news. Israel has in the past sold arms to the apartheid regime in South Africa, the military junta in Argentina and Rwanda when its regime committed genocide against the Tutsi minority. With a war raging in Europe that has killed hundreds of civilians and led to the fate of millions of Ukrainian refugees, Israel is once again choosing to invest its resources and promote its international standing by displaying weapons and technology destructive.

It’s not just a coincidence. Far-right Israeli Interior Minister Ayelet Shaked recently told a cabinet meeting that war in Europe would make countries realize that they need well-equipped armies, and thus expressed her interest in using the crisis in Europe for the benefit of Israel. Shaked’s statement reflects a long-standing Israeli policy that goes hand in hand with deporting or denying those who have sought refuge in Israel, deporting or denying entry to the very wars she helped arm . In the Israeli profit equation, missiles are more important than refugees.

After all, in recent years a considerable amount of Israel’s arms exports have been directed towards militarizing state borders and targeting refugees and immigrants around the world. An example of this is Israel’s cooperation with the EU in the areas of cybersecurity, surveillance and facial recognition technologies, which are undergoing major development globally and are being used by more and more forces. police around the world.

Historically, Israel was established through the expulsion of the native Palestinian population, and has always maintained a form of military rule over other parts of the Palestinian population under its control. Thus, the normalization of its arms exports as the backbone of its economy and the extensive network of links that the arms industry has with security forces, politics, high-tech industry and academia in Israel seem to be a natural evolution. Militarizing physical borders, as well as political and civil spheres as well as criminalizing refugees – these expressions of the military complex are complementary to the settler colonial psyche, which constantly seeks to expand as well as create racial segregation and subjugation. of, the native population.

Given the reality in which the mere fact of existing as a Palestinian serves as grounds for criminalization and accusation of terrorism – the use of the Palestinian population, especially in the Gaza Strip, as guinea pigs for weapons advanced, is inevitable, and further progress the militarization of the Israeli police force, Palestinian citizens of Israel serving as a link between the “internal crime” and the “external enemy”.

Israel’s bombing of the Gaza Strip over the past decade, particularly in the summer of 2014, has contributed greatly to Israel’s arms deals. For example, just two weeks after the last major attack on Gaza in May 2021, the Israeli Aerospace Industry (IAI) struck a $200 million drone deal with an Asian country. Cybersecurity and surveillance technologies, such as facial recognition, cellphone hacking, wiretapping, etc., have also been developed in Palestine as part of Israeli surveillance and control of the Palestinian population.

This state of affairs serves two parallel purposes: preserving the subjugation of the Palestinians on the one hand while enjoying the advantage of having battle-tested weapons on the other. In 2020 alone, a third of global cybersecurity spending was invested in Israeli-owned cyber businesses, many of which are run by former IDF intelligence officers and military commanders. That same year, the Israeli arms industry made about $8 billion in revenue, four times more than in the early 2000s.

As long as Israel’s economy continues to depend on the military industry, its interest in preserving occupation in Palestine and supporting armed conflict around the world will prevail, inevitably compromising the safety and security of its own citizens. he claims to protect. Twenty-five percent of the State of Israel’s budget is allocated to security, not counting the nuclear budget, which alone receives billions of dollars. The intersection of colonialism, militarism and global capitalism is detrimental to Israel-Palestine’s weaker communities and provides a slippery slope to ever-increasing state-sanctioned violence. The lowest groups in the socio-economic hierarchy, such as Ethiopian, Mizrahi and ex-Soviet Jews and of course Palestinian citizens of Israel, will be the first to suffer the consequences.

The veil of silence and ambiguity draped over Israel’s military industries, including its nuclear power, is a longstanding tradition that has been normalized and widely accepted. This silence allows the Israeli arms industry to continue to operate without supervision and in a total lack of transparency, allowing the Israeli occupation of Palestine in exchange for military, security and nuclear agreements, supported by the United States. United and EU. All of the above provides an irrefutable foundation for the corrupt nature of the ties between Israel and other oppressive regimes.

As Jewish Israelis, we believe that such criticism of the Israeli regime is crucial in enabling the Israelis to move towards a decolonized presence in the region, which is not based on superiority and violent expansion, but rather on a democratic state for all its citizens. Our demand that Israel (and other states) limit their investments in the military industry and allocate a budget for health, welfare, marginalized communities and real security and justice for all – is an integral part of resistance to the militarized colonial paradigm. The international community must hold Israel accountable for its human rights abuses, both as an occupier and as a major arms exporter.

So where are the Palestinian voices in the mainstream media?

Mondoweiss covers the full picture of the struggle for justice in Palestine. Read by tens of thousands of people every month, our truth journalism is an essential counterweight to the propaganda that passes for news in mainstream and traditional media.

Our news and analysis are accessible to everyone, which is why we need your support. Please contribute so that we can continue to raise the voice of those who defend the rights of Palestinians to live in dignity and peace.

Today, Palestinians are fighting for their lives as the mainstream media turns away. Please support journalism that amplifies urgent voices calling for freedom and justice in Palestine.

Seabrook NH officer, others honored for work with child victims of crime