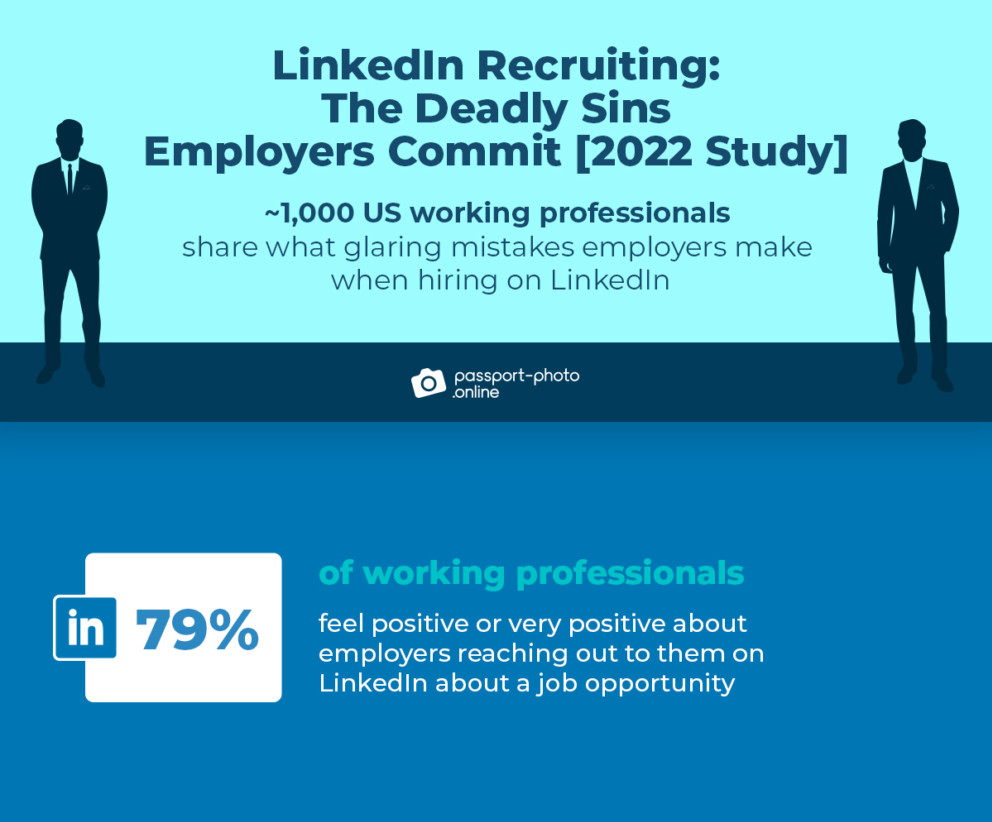 LinkedIn is one of the best places to find jobs, with the website hosting over 15 million job postings. With so many of them, however, you’re also bound to find many who make the worst recruiting mistakes that effectively discourage candidates from even taking a look.

In this article, thanks to study carried out by Passport Photo Online, you’ll see LinkedIn recruiting and the worst mistakes employers make when trying to attract top talent to their company. You’ll also find plenty of stats showing the current market for job seekers, how they view job postings, and any red flags they notice. 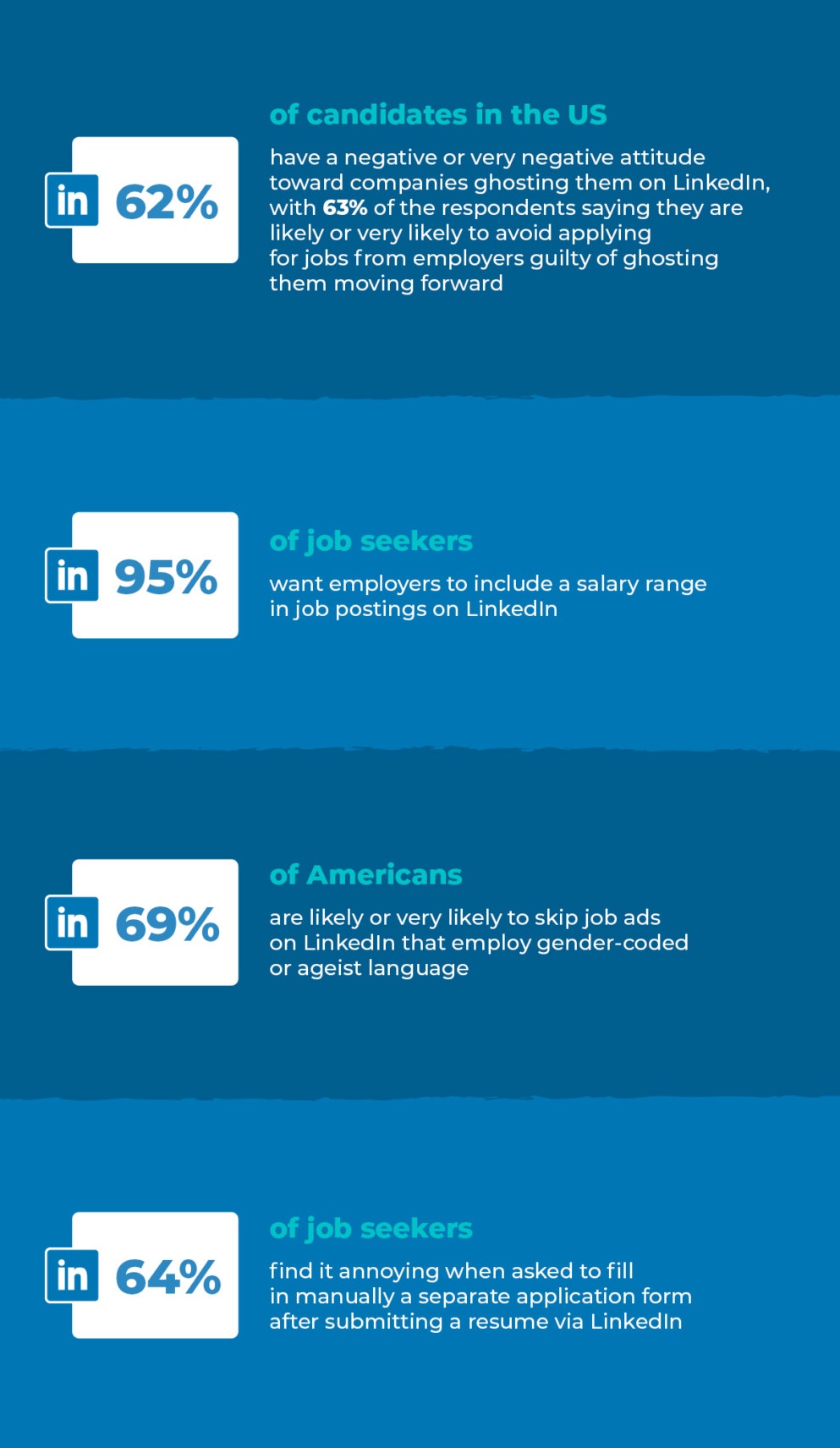 Job advertisements – the numbers behind their success or failure

Truth be told, it doesn’t shock us that a whopping 95% of American professionals, out of approximately 1,000 who were surveyed, consider the lack of pay scale on job postings a major red flag. While there’s more to a job than just your salary, you can’t argue that omitting such information would cause you to “hang on” and not consider the offer at all. Even though the job summary is well written, the hiring process seems simple and there is a lot of information on the company’s LinkedIn profile, the financial aspect is still very important.

There is, however, another incredibly important finding in the study that should be of interest to LinkedIn recruiters. It turns out that a large majority of Americans (79%) are happy with job offers and are more likely to accept the offer if the company reaches out. After all, it’s in the company’s interest to hire the right person and not just anyone who can fill the void left by someone. So, it’s no surprise when you consider how much ego can be boosted when you’re looking for a job, and it’s the job that actually picks you up.

These situations don’t necessarily always end in successful applications and hires, as the practice of ghosting is still very much present in LinkedIn recruiting today. Ghosting, which can be described as a sudden lack of communication or any other form of contact, is the worst, and job seekers agree.

Almost two-thirds of Americans surveyed admitted that if a company ghosts them, they will most likely put that company on their own personal blacklists and not accept any job offers in the future.

As we’ve said before, research shows that recruiting efforts by companies that include contacting candidates will be met with a positive response. Most job seekers will be very happy to respond to the message positively.

The fact is, however, that these messages that recruiters send to potential candidates can be a pretty haphazard strategy. It turns out there are plenty of ways to ruin a potential candidate’s enthusiasm and a number of mistakes to avoid if you want to attract top talent.

The top five reasons job applicants ignore the message include, in order:

All of the arguments made by Americans against taking the job posting seriously should be a big red flag for LinkedIn recruiters and hiring managers, who are still guilty of at least some of those mentioned.

There is, after all, art in writing job opportunity posts. It would certainly be fair to say that anyone who gets a personalized one, with an appropriate job description, resume and salary range, will give the recruiter a chance.

However, we are not always connected and sometimes miss a message or two. We give ourselves little breaks when looking for jobs, which is why companies like to write a follow-up too.

However, the practice must respect certain rules so as not to discourage job seekers in the end. According to the survey, the most appropriate number of follow-ups that US job seekers will tolerate is two. No less than 39% of respondents think two is the magic numberwhile one in four think a reminder is enough.

How to write job advertisements? What should be included?

LinkedIn recruiters must give applicants all the information to avoid committing serious sins on job postings. The general rule that is still widely overlooked is that the more the better.

Fortunately, the study provides a clear overview of what kind of information job seekers find crucial and what is barely considered a plus.

Job title tops the list, with 69% of respondents considering it an absolute necessity, while second and third place goes to location and a detailed role summary.

So, if you are a recruiter and you are missing any of the aforementioned information in your job posting, you better fix it, otherwise candidates will ignore your job postings.

Don’t forget that there’s a lot more you can fit into a job posting, like:

Do this, and you’ll avoid committing major sins that will cause job seekers to ignore the ad.

Moreover, the language you use also plays a huge role. The study found that using words like “ninja”, “superstar” or even “Jedi” in a job posting actually elicits a pretty positive response. In fact, nearly half of Americans surveyed (48%) admitted that they like these colloquialismswhile only 15% overall found this wording boring.

Beware, however, because job seekers are careful what they read, and the study tells us that 62% will not react well when they find signs of ageism or sexism in the offer. employment.

As many as 42% of Americans surveyed admitted they would skip job postings that use discriminatory language altogether.

Job application processes can be lengthy. They can include many milestones, including completing a task, for example. There is, however, one stage that most Americans believe is the worst. Although the CV has already been sent, submitting an additional application is widely considered a bad sign. You might argue that such a practice is an unnecessary waste of time, and the study shows that many would agree.

According to the study, you also need to consider that many potential new hires won’t be thrilled with an interview.

Almost as many won’t object to such a practice at the meet-up, but it’s something to consider before talking face-to-face with the candidate.

Hiring managers and job ad writers have no shortage of mistakes to consider when doing their best to attract only the best candidates. The smallest errors, such as typos or missing unique information, can cause all potential candidates to look away.

If you are one of the employers guilty of any of the errors mentioned by the Americans surveyed, consider carefully examining your hiring practices on LinkedIn and be sure to treat them accordingly.

About the Author: Michal Laszuk is a writer at PhotoAiD. With a background in linguistics and journalism, he is also described as a graphomaniac with an endless passion for literature and storytelling.

Consider this from NPR: NPR