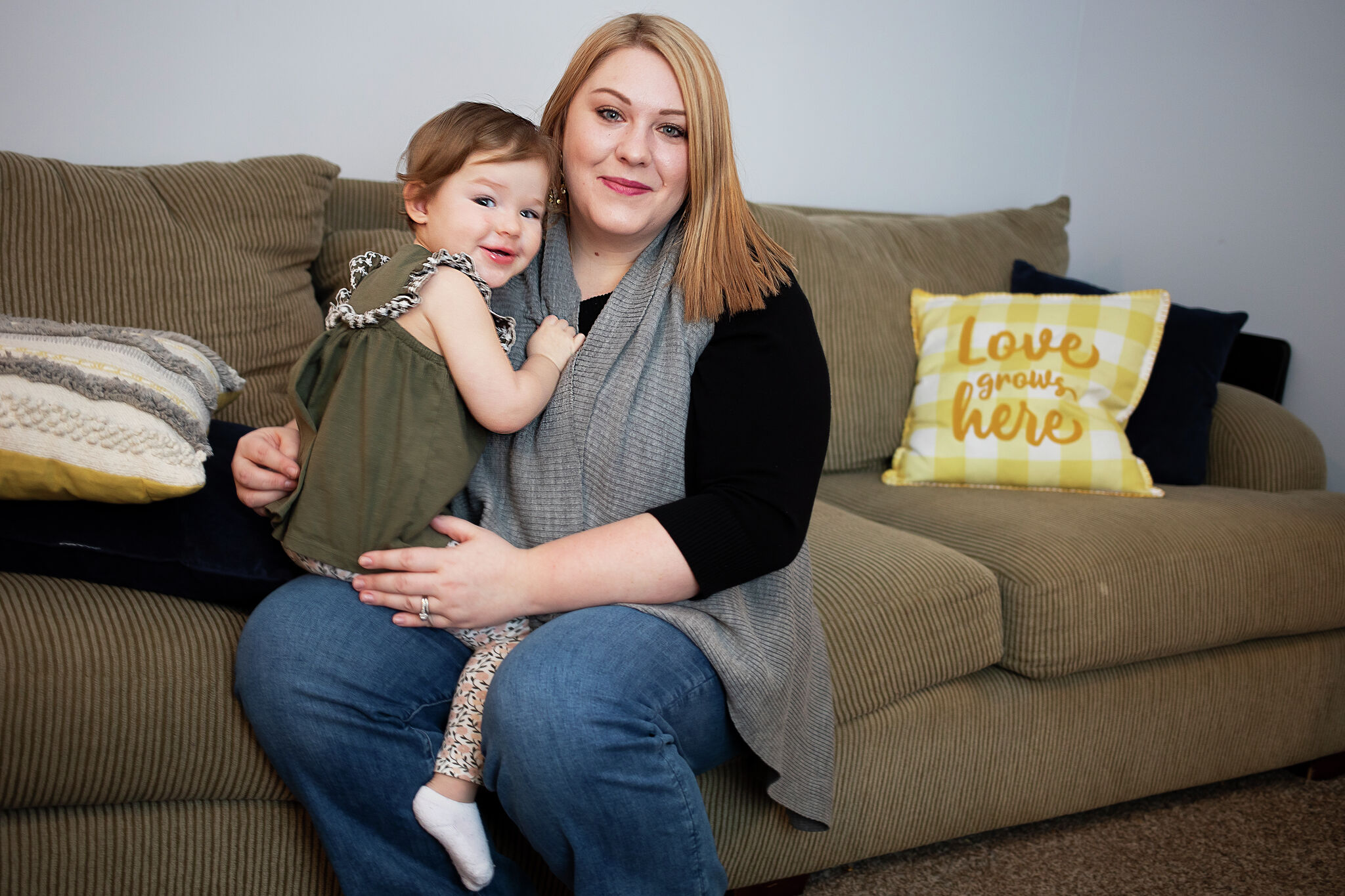 Midland resident Alizia Hamilton applied for 30 professional jobs in a recent six-month period. She only got a response from one employer.

She was trying to find a job that would pay her enough to pay for daycare for her children and that would meet her qualifications. It turned out to be a daunting task, as she sent in application after application, only to hear crickets in return.

Hamilton wasn’t the only one. Midland County resident Tammara Middleton has been looking for work for two months and has yet to find a job, despite continued claims of job shortages from employers. She wonders why she can’t be hired.

“It just makes me wonder if there are really that many jobs out there?” Middleton said.

The labor shortage has been a hot topic for months across the country and has caused headaches for many employers. Still, many Midland-area residents have reported difficulty getting hired, despite actively applying.

Christopher Rishko is the CEO of Great Lakes Bay Michigan Works!, an employment agency that strives to meet employment needs in the area. The agency works with employers to help them understand what the job market looks like, determine the skills they need and help them recruit.

For job seekers, Rishko said the agency could help them by getting uniforms, helping them learn interview skills or identifying any other barriers to employment they might encounter.

“We don’t place candidates; we are doing our best to make him the most competitive candidate so that he can get (a) job on his own,” Rishko said in an interview in late December.

The agency works with more than 3,000 employers in the region, from large companies to family businesses, he said.

Rishko told the Daily News that the labor shortage was improving but was still plaguing many businesses nationwide. Once businesses started to reopen in person, but positions went unfilled and people left their jobs, he said the agency initially thought it was due to the availability of unemployment benefits .

But based on surveys conducted by the agency last year, Rishko said very few of those surveyed said they had remained unemployed due to receiving unemployment benefits. Many people gave other reasons for not working, including the need to care for other people (children, elderly, etc.); looking for flexible hours, better benefits and higher salaries; and looking for jobs as good or better than the ones they lost during the pandemic. He said there is also an exodus of workers aged 55 or older who are retiring.

“When it came time to get back into the workforce, they were like, ‘Well, I’ve worked on one income before, so now I want something better,'” Rishko said. had not yet re-entered the labor market were expecting something better.”

It was a major job search driver in Hamilton. She was forced to quit her job as an accounts payable specialist at the start of the pandemic due to the closure of school and daycare services. Since her job didn’t offer remote positions and her husband’s job has irregular hours, she had to stay home and look after her 5-year-old child, she said.

After quitting her job, Hamilton gave birth to her second child and completed her associate’s degree at Delta College. Eventually, she decided to return to work to help her family achieve long-term success, knowing her degree would give her a head start in the job market.

One thing Hamilton was looking for in a job was a salary to cover childcare costs, which for his now 19-month-old child could be as high as $1,100 a month. She also wanted to find a professional job where she could continue to have growth and opportunity.

“I hear a lot of people say there’s a labor shortage and people are just being lazy,” Hamilton said. “I think because they see so many openings and so many jobs that need people, they just assume that people just don’t want to work. But they don’t think about all the domino effects that have happened leading up to this point.

“I’ve worked all my life,” she continued. “I myself have worked since I was a young teenager, and to see other people say that people are just lazy, I say that I was forced (to stop working) because of the pandemic to take care of my children Many people are not lazy, they are just doing what they need to do to take care of their family during a pandemic.

However, finding jobs with higher pay ended up being easier said than done. She applied for jobs that she felt did not meet her criteria, but no one would respond to her and following up on applications was also a futile effort.

Like Hamilton, Middleton lost her income when the pandemic hit, with her home-based hairdressing business closing in September 2020. The only job she was able to find was as a driver at a car auction. cars, on which she worked until now.

However, that job doesn’t provide a very stable income, fluctuating from 7.5 hours one week to just 5.5 hours the next, Middleton said. So, two months ago, she decided to look for a new career that she would work in until her retirement.

She applied for jobs for which she was either overqualified or not quite qualified, but could learn quickly. But after sending in 30 applications, she was only offered two interviews. After one, she never heard from the employer, and the other employer sent an email saying they had chosen someone else.

Middleton receives responses indicating that the employer has found another candidate but will keep Middleton’s candidacy for 90 days. About 95% of the places she applied to didn’t get back to her, she said.

Middleton, who is 57, wonders if his age was a factor in people not hiring him.

“I’ve never had a problem finding a job before, something always happened to me,” Middleton said. “I never had to worry about it, and now I’m constantly fighting and trying.”

Another Midland resident, Jamie Maxwell, left her job at a hotel in the fall of 2021 after a change in management made her job a “nightmare”. So after hearing about employers who were desperate to hire and seeing all these signs of “help wanted,” she gave her two weeks notice and started looking for work elsewhere. She wanted to find a job with flexible hours, as she is a single mother.

However, this did not end up becoming a reality. She received few phone calls during her month-long job search. She was getting scared and frustrated that she could pay her bills.

In one instance where Maxwell was asked for an interview, the employer only offered her 10 hours a week, which neither she nor anyone else could live on, she said.

“I was starting to get pissed off,” Maxwell said. “(Employers) say they’re hiring, then (they) don’t call people back. How desperate (are they) for people when (they) don’t even call me back? »

Rishko said the lack of responsiveness from employers could be blamed on the online application process through websites such as Indeed. The large volume of applications received through these sites has led employers to sift through mountains of potential employees, creating huge backlogs of applications.

However, Rishko stressed that employers should always try to track potential employees, even if they’re not going to hire them, so as not to burn bridges with optional talents that might be good for other positions.

One group of people the labor shortage has disproportionately affected are women, as they become dependent caretakers at home, Rishko said. Hamilton can attest to this and said many working mothers have been forced to choose between working or caring for their children during the pandemic.

Along with the types of jobs Hamilton has experience in (accounting, accounting assistant, receptionist and other professional office roles), she said they are largely filled by women, with these roles being vastly undervalued and underpaid. She wasn’t looking for a job that pays $13 an hour to do bookkeeping for an entire company, she said. It was surprising to her that wages were still so low after she started looking for work again.

“I see a big shortage because a lot of women have been forced out of the workforce,” Hamilton said. “Now they’re trying to come back, and they’re still undervalued in those roles.”

As for advice to employers looking to hire, Rishko said they should be specific with their needs in job descriptions and make their compensation competitive with others in the area. So far, local employers have responded with wage increases, which have risen 11% in the Great Lakes Bay region, and they are looking for ways to sponsor childcare for workers, a- he declared.

For job seekers, he said they should identify what they are looking for and try to cast a wide net for jobs.

Fortunately, Hamilton and Maxwell were able to find jobs. Maxwell works part-time at Meijer and says she has the opportunity to learn about multiple departments.

Hamilton now works as an on-mission contribution processing specialist for Dow Chemical, which she got through a referral to Kelly Services. She earns enough to pay for daycare and says it’s a fantastic job.

“Even though I struggled and was out of work for a considerable amount of time, that tenacity and I was like, ‘No, you’re a precious person. You are a valuable worker,” Hamilton said. “(The research) forced me to wait six months, instead of taking one of those $13 entry-level jobs that I knew was better than, that I knew wasn’t going to pay my childcare costs, (and) that I knew I was going to struggle with.