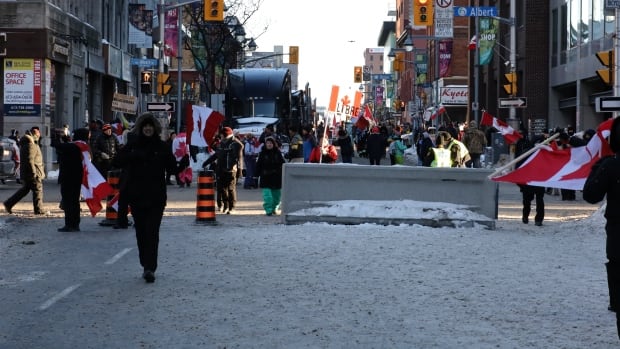 Ontario sends $11.5 million to Ottawa for post-convoy business and tourism

The Ontario government is sending $10 million to Invest Ottawa in grants to cover money lost due to busy downtown streets earlier this winter. Another $1.5 million will go to Ottawa Tourism to market the city.

Some streets in downtown Ottawa are still closed to vehicles for cleaning after more than three weeks of the protest, which ran from the last weekend in January until the Family Day long weekend.

Safety concerns, road closures and messages to avoid downtown have led many businesses to close just as they exit the last provincial capacity limits.

As police drove protesters away from the capital two weeks ago, the federal government announced a $20 million pool for small businesses affected by the occupation – each would be allowed to withdraw up to $10,000.

Some business leaders said that would not be enough.

On Friday, a provincial press release announced a similar fund in the amount of $10 million. Like the federal money, Invest Ottawa will coordinate it and give small businesses grants of up to $5,000.

The money from Ottawa Tourism will be used for a campaign to attract visitors to the capital this spring and summer, the statement said.

“Tourism has a major role to play in the recovery of our community; in the short term, we encourage Ottawans to support downtown as we resume our role as a welcoming, safe and inclusive destination,” said Michael Crockatt, President and CEO of Ottawa Tourism. in the release.

WATCH | The effects of the Omicron closures, then of the occupation:

‘It can’t get any worse’: Businesses face double whammy of pandemic and protests

Michelle Groulx, executive director of the Coalition of Business Improvement Areas of Ottawa, says local businesses that were already struggling during the pandemic have had to close again because of the protest. 1:13

Ontario NDP Leader Andrea Horwath was actually visiting Ottawa on Friday to ask the province to match the $20 million from the federal government.

There is also a class action lawsuit seeking compensation for residents, workers and businesses from protesters and donors to crowdfunding campaigns.

A look back at Green’s time with Duke’s basketball program | News, Sports, Jobs