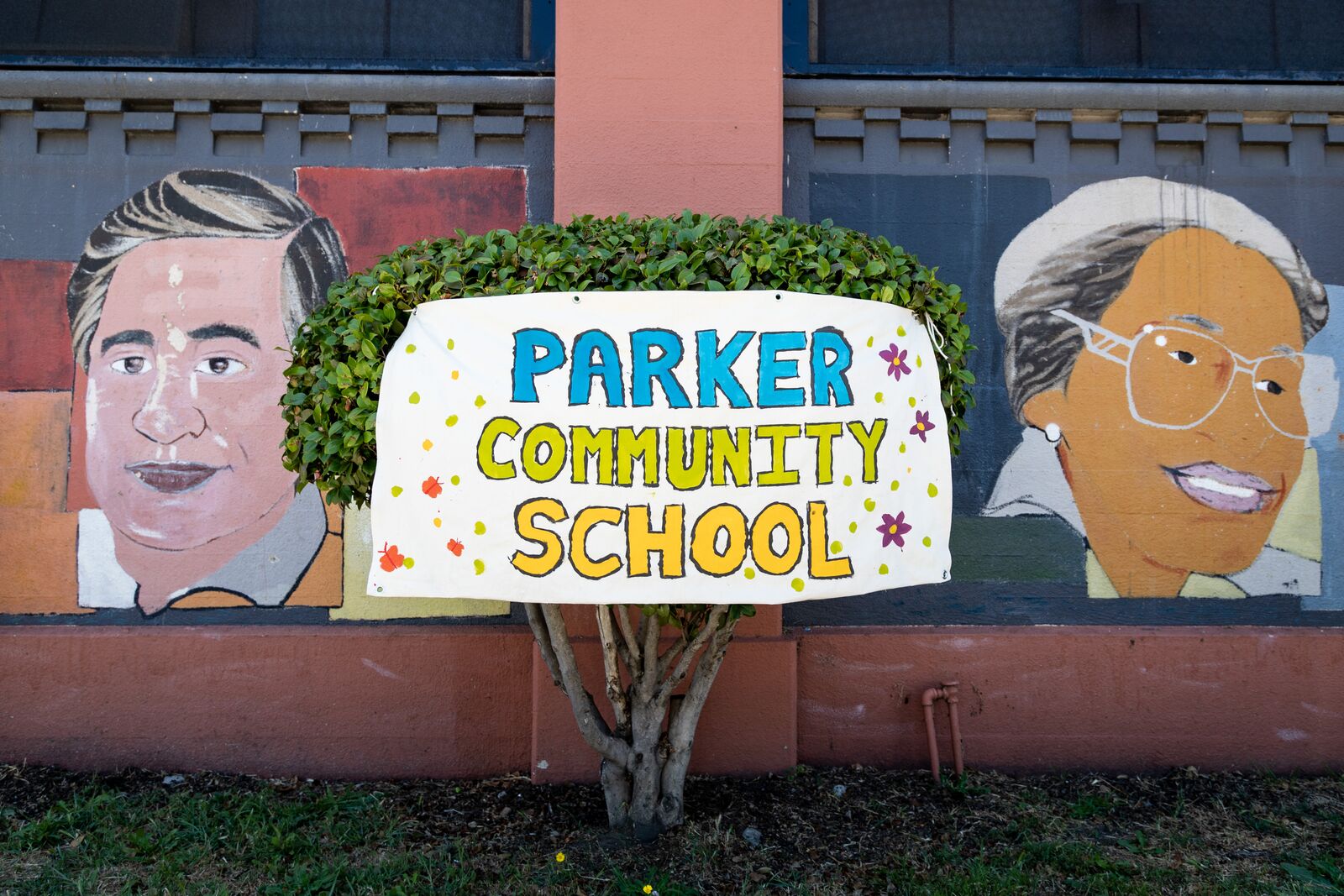 Parker’s elementary families don’t want their school closed. So they took it back

When a group of moms learned four months ago that their children’s school would be permanently closed at the end of the year, they made a promise to themselves: they would do everything in their power to keep Parker , a 96-year-old East Oakland School operates.

On the last day of school, May 25, Parker promoted his final eighth and fifth grade classes in emotional ceremonies.

“It was supposed to be one of the happiest times for these kids. And instead of watching them walk happily across that stage, we saw them crying, hanging on to their friends and not wanting to leave school. “Said Azlinah Tambu, mother of two Parker students. “So I, a group of mothers, children and community members decided to stay after graduation and not leave.

The group of about half a dozen families have occupied Parker since then and have no plans to leave unless the Oakland Unified School District reverses its decision to close the school. Other community leaders, neighbors and education advocates stop by for supervision and security, or to drop off donations.

This week, the group launched Parker Community School, a free summer program for neighborhood kids not licensed by OUSD.

The occupation is the latest community action against school closures, announced by the school board in January and approved in February. Parker and Community Day, a school for students expelled from traditional middle and high schools, will not reopen in the fall. Next year, five more schools will close permanently: Brookfield Elementary, Carl B. Munck Elementary, Fred T. Korematsu Discovery Academy, Grass Valley Elementary and Horace Mann Elementary. Two K-8 schools, La Escuelita and Hillcrest, will no longer serve middle grades.

School board members who support the closures said they were necessary to address the district’s budget shortfall. Moving forward with the closures also made OUSD eligible for an additional $10 million in state funding. Last fall, OUSD board members and Superintendent Kyla Johnson-Trammell received a letter from County Superintendent LK Monroe warning that unless they take drastic action to reduce spending, it could impose stricter oversight and possibly revoke their salaries. Monroe, who is running for re-election as county superintendent this month, worried about the district’s reliance on one-time funding to fill budget gaps and declining enrollment, which is driving down funding for the district. Monroe rescinded her warning after the board voted to close schools.

“Our kids are worth more than all the money you think you’re trying to save,” said Rochelle Jenkins, another Parker mom. “Our children have no price on their heads.”

In addition to the sit-in, OUSD faces legal opposition to the shutdown plan from multiple parties. The Oakland Education Association teachers’ union says the district violated an OUSD board policy that was negotiated in 2019 and filed an unfair labor complaint with the Employee Relations Commission state public. The American Civil Liberties Union of Northern California has also filed a complaint with the state attorney general, asking that the office review the disproportionate impact of the closure plan on black and Latino students. Earlier this month, an alliance of youth and community organizations called the Justice for Oakland Students Coalition filed a lawsuit with Alameda County alleging that the school district failed to perform the required environmental analysis during the recommendation for closure.

While Parker’s group has received trespassing warnings – a notice on a school gate states that the building and grounds are closed, and that it is illegal to enter without permission from school management. the OUSD-district did not say whether it planned to remove them, and portrayed the action as that of a minority of Parker families.

“We recognize that some people are upset about Parker’s closure,” OUSD said in a statement responding to questions from The Oaklandside. “We would ask them to choose a different means of protest, one that does not disrupt normal staff year-end procedures and the need to close the year.”

The campaign was an exercise in “people power”, Tambu said.

“We knew people in the community needed child care and ongoing training for the summer,” she added. “So we took our core group of people and talked about our skills and what we can offer.”

After a kick-off rally on Saturday, the scene at Parker this week looked like a pretty typical summer program. About 20 elementary and middle school students showed up for art and chess lessons, which took place in a classroom, learned roller skating and double Dutch outside in the Parker yard and had lunch in the school cafeteria. A gardening teacher from Contra Costa County created vision boards with the students, an OUSD staff member from another school taught chess, and a few students led the session on roller skating and skateboard. Tambu acts like a manager of sorts, working out the logistics of the class schedule, using a walkie-talkie to communicate with other adults on campus, and making sure the students have what they need.

In addition to volunteers, the group relies on food and supply donations and has set up a GoFundMe campaign, which received a surprise $10,000 contribution last week from an anonymous donor. Funds will go towards supplies and equipment to support the sit-in and support those supervising and teaching in the summer program.

Jayvien Bolden, who just finished her freshman year at Skyline High School, dated Parker and helped teach the skating lesson. Jayvien’s two younger sisters also attended Parker this year. He wanted to help with the campaign to save Parker because of the teachers there who boosted his confidence when he was brand new to school and to the city, Jayvien said.

“My teachers told me that I had a lot of potential, other than doing stupid things,” he said. “Everyone here is really trying to help.”

At the same time that the students were skating in the yard, some Parker staff were in their classrooms packing their books and decorations. Ellie Poling, Parker’s librarian, had hundreds of books to pack. Poleing started at school in the fall and loved seeing students’ curiosity and love for reading grow when they visited the library. But since February, when the board voted to close Parker, the atmosphere has changed, she said.

“It’s always been such a happy play,” Poling said. “But it’s just hard showing up here and not knowing how to save him, despite all the organization and conversations.”

Poling, who is in her first year working at OUSD, has found some silver linings in the situation: She’s headed to Madison Park Academy and can take most of the books with her. She also donated some at a free book fair she hosted at the end of the school year and donates some of the books to children who are currently participating in the community-run program at Parker.

The occupation recalls a similar action that took place 10 years ago, at the site of what was then Lakeview Elementary School. Just like now, OUSD had announced it would close several schools, including Lakeview, in a bid to save money. Protesters occupied Lakeview for more than two weeks until OUSD police evacuated them.

Participants in the Lakeview Occupy and other social movements in Oakland also lent their skills. Misty Cross, one of the mothers involved in the Moms 4 Housing movement who also joined the Lakeview protest, spent a few nights at Parker during the occupation.

“I know what it’s like to cry out for help and not get it,” she said. “I wanted to bring the things I’ve learned throughout the Moms 4 Housing movement so they know they’re not alone. We’re using all of our tools together to make this movement a success.

The Parker Group is also working on a community resolution to submit to the school board reversing the closure decision. The group is also planning Warriors watch parties, a Saturday skating night and town halls to hear suggestions on how the community can benefit from the Parker building if there isn’t a school left.

Like the Lakeview protest, the Parker occupation activated a number of parents and caregivers in the school community who had not previously been so engaged in Oakland education issues.

At the start of this year, Tambu was not registered to vote. She was unaware of the school board, or that she had an elected representative on it. But the past few months have been a lesson in community organizing and local governance, sparked by the council’s decision in February to close schools. Since then, Tambu and some of Parker’s other parents have attended every school board meeting to speak out against the closure and have participated in marches and rallies. And now they are trying to run their own school.

In a move she couldn’t have foreseen four months ago, Tambu also decided to run for the District 6 seat on the school board, which was vacated by Shanthi Gonzales last month. The remaining board members will appoint a new director by the end of June.

“They need someone with that perspective; someone who is not politically inclined,” Tambu said. “I’m really going to make decisions based on what the parents need to the best of my ability. I just want to do what’s right for the kids in District 6.”

The value of health | The current of UCSB