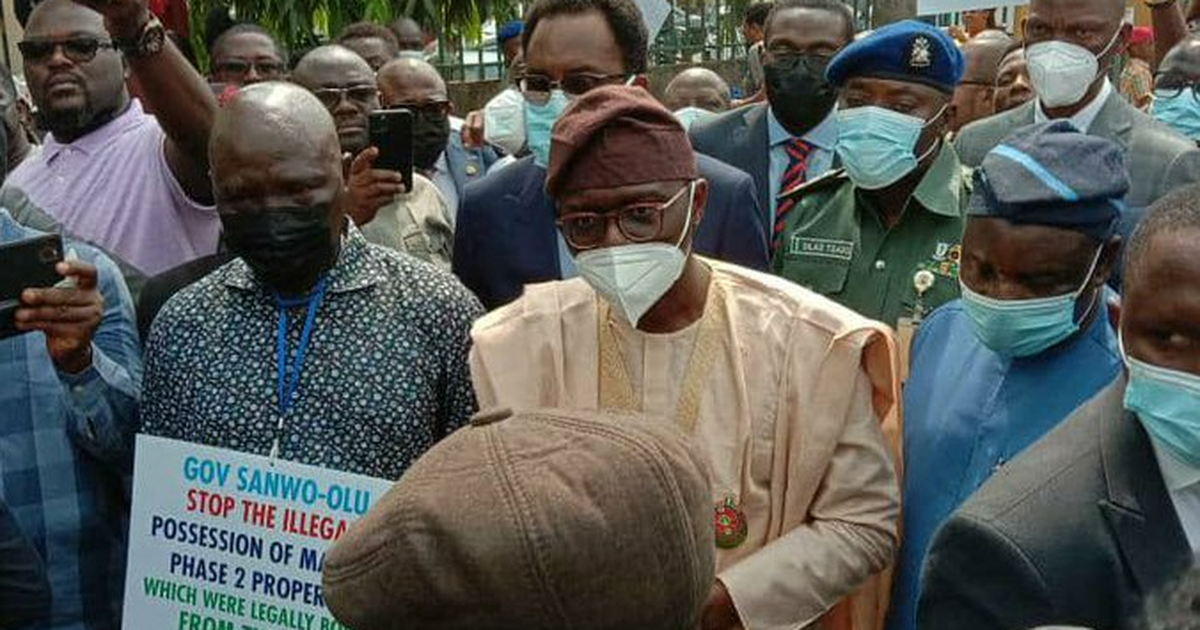 Agents first showed up last month to help demolish the estate’s properties on behalf of the Shangisha Landowners Association which won a land dispute against the state government in the Supreme Court.

Affected residents of the estate have since appealed and protested to the government to intervene and stop attempts to demolish their buildings.

Governor Sanwo-Olu visited the estate on Tuesday to order the police to enlist, but a Chief Superintendent of Police (CSP) who led the team pushed the governor away.

The CSP said he was there by order of the Inspector General of Police, Usman Baba, and Attorney General of the Federation, Abubakar Malami, and can only be ordered to withdraw by them.

Sanwo-Olu pointed out that he had spoken to Baba and Malami before, and the two were unaware of the ongoing police action, but this did not deter the police team.

“I don’t know what other interest they have beyond just keeping the peace of the country.

“It is not an expectation that I expect from them, because they have nothing to do here”, he told reporters present during the clash.

The Shangisha Homeowners Association says the Supreme Court ruling mandated the Lagos state government to return 549 plots to the association after a long battle for ownership.

The group says the government forcibly took the disputed plots between 1984 and 1986 on the pretext that they would be used to build a hospital to international standards but converted instead for personal interests.

The first legal action to recover the plots of land was filed in 1988, according to the association’s president, Adebayo Adeyiga.

The Lagos State High Court in 1993 issued a mandatory injunction order for the government to allocate 549 plots of the disputed land to the association, which was confirmed by the Supreme Court in 2012 following repeated appeals against the judgment.

Speaking to affected residents after Tuesday’s confrontation, Governor Sanwo-Olu said security officials would step down as all parties involved in the conflict engage in reconciliation talks in his office on Wednesday January 5. .

“The war is not getting anyone anywhere. It’s on the table that we are all going to solve it”, he assured them.