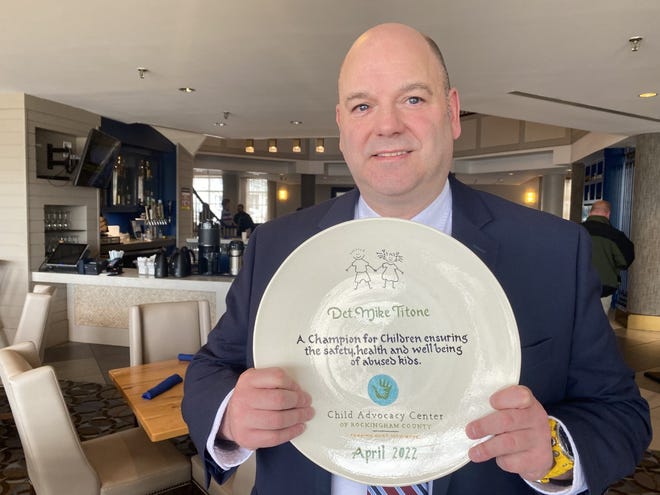 Seabrook NH officer, others honored for work with child victims of crime

PORTSMOUTH — Seabrook Detective Mike Titone had a hunch Scott Dunn was a serious threat to kids in his neighborhood, even if Dunn was just talking to kids outside his apartment complex.

“In my experience, he heals children,” Titone said.

As a result, Dunn was arrested and sentenced of simple and second-degree assault in a case for which Titone was honored on Friday by the Children’s Advocacy Center (CAC) of Rockingham County.

The CAC recognized Titone and six others from its network, which includes police officers, prosecutors and other professionals who work with child victims in criminal cases. The CAC provides a safe environment to assess allegations of sexual and physical abuse against children between the ages of 3 and 18. Friday’s Champion for Children awards ceremony took place at the Sheraton Portsmouth Harborside Hotel.

“The people we recognize have gone above and beyond their job description,” said CAOT Executive Director Maureen Sullivan. “It’s our tiny little way of saying thank you.”

CAC program coordinator and forensic interviewer Brooke Murphy said Titone’s case was one of those that initially didn’t seem the most heinous based on initial reports. She said Titone, who has worked with Seabrook Police since 1994, felt Dunn, 57, was a bigger threat than initially thought.

We are at your side:The Hampton Falls family behind a giant Ukraine travel map

Titone said Dunn allegedly spoke to children outside the Rockingham Village apartment complex, according to multiple witnesses, including making sexual comments. However, the police had to wait to make an arrest until he committed a more serious offence, which Titone said was stressful. He said Seabrook Police were constantly patrolling the complex until they finally received a report that the suspect grabbed a girl and tried to bring her inside.

A police affidavit said he invited the girl into his ‘pantry’, shook her hand ‘really hard’ and when she refused to go, told her ‘Come on, I I’m not a serial killer”.

The girl fled and the police made the arrest.

“He read between the lines, saw the risk, the threat that this person posed to his community,” Murphy said.

She remembers sitting with Titone at the CAC as he anxiously explained why they had to wait and how painful it was for him to stay put.

“His mind kept thinking about what this person was doing as he had to sit and wait,” Murphy said. “It was heartbreaking to see the anguish on his part.”

Titone said he was honored to receive the award, saying he was shocked when he received the notice in the mail. He said the challenge of investigating crimes against children is ultimately outweighed by the good that comes from the work he and the CAC do to bring the perpetrators to justice.

“You get a boost when you go to court and see someone convicted,” Titone said. “Give the victim a little more closure. It’s a very good feeling.

Brad Von Haden, Kensington Policemanalso a part-time officer from Hampton Falls, was recognized for a case that is still pending and for which Murphy could not share details.

“Brad was nothing but support for these victims,” Murphy said. “His intention was not just to build a good case, but really more to protect these people.”

Von Haden said most people working on crimes against children don’t do it for recognition.

“I think we all do it because we care about the victims. They mean a lot to us,” Von Haden said. Like Titone, Von Haden said the hard part of the child labor cases was worth the outcome.

“I realize the things I see, they’re terrible,” Von Haden said, “But you have to see them to try to help the victim.”

ACC member and Portsmouth resident Frank Firicano was also recognized as someone who constantly asks for ways to help the organisation.

Megan Ryan, Rockingham County’s senior assistant attorney, was recognized for being an “invaluable resource” to the CAC and the county’s multidisciplinary team.

“It’s hard to imagine our team operating the way it does without his guidance and expertise,” Murphy said. “Her bright and charming nature has made her a mentor to whom individuals from all disciplines gravitate.”

A good ride (not) wasted:Hampton man, 81, named ‘first walker of the year’

Stacey Parker from New Hampshire Division for Children, Youth and Families, was recognized as a “truly admirable child protective services worker.” Murphy cited a case in which the victim was a girl who disclosed sexual abuse by her mother’s boyfriend, at which point her entire family turned against her.

“It was heartbreaking for all of us at the CAC and for the investigation team to know that she (the victim) had no support, but Stacy held her own,” Murphy said.

Corissa Leonard of DCYF was honored for being a “jack of all trades” in the field of child protection, exemplifying DCYF’s mission to help families keep their children safe. Elias Tyrrel-Walker of Haven was recognized for his kind and effective presence as an advocate working with victims, handling high-pressure cases with “grace and compassion every time”.

The guest speaker at the awards ceremony was Amelia Dutton, a sexual assault survivor who worked with CAC while she brought charges against her attacker. She said the assault, which happened over the summer after she graduated from high school, left her with a ‘shell’ of herself, but the CAC helped her find it. The healing.

“Every lap someone took a little bit of my burden away,” Dutton said.

CCA Board Member Richard Sawyer also Rockingham County Sheriff’s Department the deputy chief and retired Hampton police chief, said it was important to recognize the work of those who go above and beyond.

“It’s probably one of the toughest jobs there is, not just for law enforcement, but for society as a whole,” Sawyer said. “When you see tragic things happening and the great results, because of people working hard, they should be recognized for the hard work they do.”