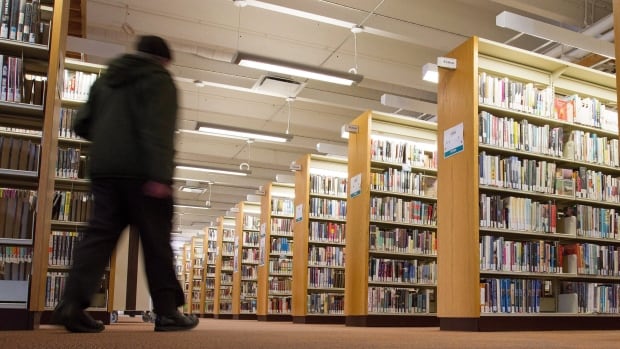 Librarian Nancy Duncan has been cursed, cursed and cursed so many times at work that she says she’s lost count.

She has been sexually harassed and regularly sees clients refuse to wear masks and make racist remarks towards colleagues. But sometimes she wonders how long she will be able to cope.

“We rule it out, but as the weeks and incidents repeat themselves, it starts to take a toll on your sanity,” Duncan told CBC News.

“Libraries are like a microcosm of society. All the problems that you see on a larger level, we experience them locally and individually.”

Duncan and librarians Cameron Ray and Eila McLeish speak out against the harassment, assaults and threats they face every day in Ontario libraries, which they say have become more common during the pandemic as more and more other public spaces have closed.

Libraries first opened after closures ended and have become a vital social safety net, a free place for everyone, Ray said.

However, he said he was subjected to three death threats and three physical assaults. Often, he feels overwhelmed by the growing number of clients suffering from mental illness, homelessness or addiction.

“It’s still a place that I really believe in and love,” said Ray. “But at the same time, we just don’t have the time to diagnose someone and then be able to give them the proper attention that is right for them.”

McLeish said she had also been physically assaulted at work on several occasions. She once discovered the body of a deceased client and has since been diagnosed with post-traumatic stress disorder.

“I demoted to a lower level because I couldn’t stand the incidents I was going through over and over again,” McLeish said.

“And it hasn’t been much better.”

Their accounts follow the results of a University of Toronto study that interviewed 527 librarians in four major Ontario cities from January 2020 to April 2021. CBC News has agreed not to disclose the cities to protect life respondents’ privacy and align with the ethics of the study.

The survey found that almost all of the respondents, who are mostly women, witnessed or experienced violence, bullying and harassment while working in libraries. Just over two-thirds said they felt unsafe at work at least a few times a month.

Siobhan Stevenson, a professor at the University of Toronto’s Faculty of Information who led the project, said that while incidents of abuse do not occur in all library branches, the survey results indicate that many librarians face the same kinds of challenges as other frontline workers, but are often overlooked.

“The main findings have been amazing,” Stevenson said. “It’s very stressful for these workers and they are kind of invisible.”

Sexual assaults have also been reported.

Fourteen librarians said someone tried to rape them at work. Eight said they were sexually assaulted. Twenty reported witnessing the sexual assault or rape of a colleague or client.

“It’s a small number, but the fact that it exists is concerning,” Stevenson said.

Customers viewing pornography on library computers are also a problem, the research suggests. Seventy-one percent of respondents said they had seen this sexual material.

The three librarians interviewed by CBC News all said they need more support from their municipalities, such as hiring public nurses to help clients in need, as well as more health officers. security, social workers and staff.

What’s often the most difficult situation is not being able to help, Ray said.

“You see somebody come into town and take drugs and you see their body go down, their mental capacity go down and then you have to shut them out because they can’t function anymore,” Ray said.

“It’s truly tragic that the library cannot be more of a resource for them.

“We’re the ones who should pick up the pieces, but we just can’t.”

The Trail of Broken Treaties and the Occupation of Wounded Knee