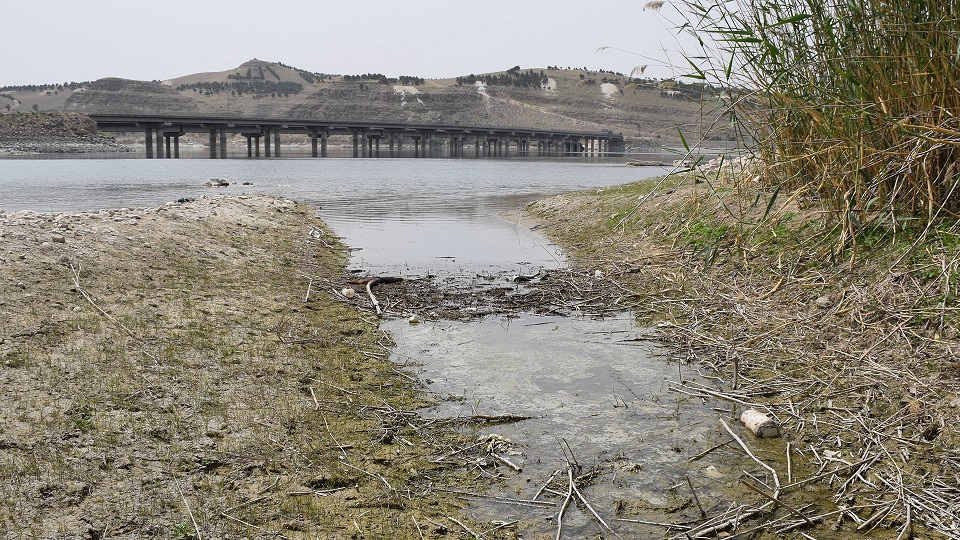 The waters of the Euphrates flow from large areas of northern and eastern Syria, months after the Turkish occupation state began withholding large amounts of river water from Syrian territory.

Since the beginning of 2018, Turkey has started imprisoning the waters of the Euphrates from Syrian territory, but intermittently, as it used to cut off the water for weeks and then release it for others. weeks, but the incoming level was better than the current. a.

Over the past two years, the Turkish occupation state has imprisoned large amounts of the Euphrates for consecutive months. Since last March, it has discharged only 200 cubic meters of water per second into Syrian territory, when it was supposed to discharge more than 500 cubic meters per second according to an agreement signed between Ankara and Damascus in 1987 and registered at the United Nations. .

Since last March, the Turkish occupation state has continuously released the minimum amount of water from the Euphrates, and this percentage of water is barely enough to operate the dams.

Cutting off the waters of the Euphrates is one of the many means used by the Turkish occupation state to fight northern and eastern Syria. Since the beginning of the revolution of July 19, 2012, the aerial and ground attacks launched by the occupying power on the region have not ceased, in addition to the recruitment of agents and the defamation of the Autonomous Administration.

The effects of this war appeared quickly in Syria, as the Euphrates lakes lost a large part of their strategic stocks, which led to a decrease in the hours of electricity production, in addition to a decrease in the amount of water provided to farmers, and hundreds of them are now struggling to get water to irrigate their crops.

Farmer from Al-Auja village in rural Raqqa, Ahmed Al-Ahmad, says the percentage of water reaching their farmland is low.

He added, “Crops are dying due to lack of water, and this is very detrimental to us,” noting that herders are suffering like them.

Farmer Aboud al-Gharib, a resident of Kasra al-Faraj village in rural Raqqa, says the lack of water is affecting their agriculture.

The water quality also declined and the Euphrates stream was polluted, which turned into a swamp due to the stoppage of water flow and the accumulation of waste, which led to the appearance of diseases.

The North and East Syria Health Authority has recorded unprecedented cases of cholera in the region, in areas adjacent to the Euphrates, which is believed to be the main source of spread of the disease.

Joan Mustafa, co-chairman of the health authority of the Autonomous Administration of North and East Syria, revealed during a press conference held on September 21 that the first case of cholera appeared in the western countryside. from Deir Ezzor, which is the epicenter of the disease spread with Raqqa, Tabqa and Hasaka.

He explained that there have been 2,867 suspected cases of cholera since September 5, while 16 deaths have been reported.

Earlier this week, the Damascus government’s health ministry announced that 253 cases of cholera and 23 deaths had been recorded.

“The outbreak of the disease is believed to be linked to irrigating crops with contaminated water and people drinking unsafe water from the Euphrates, which divides Syria from north to east” said UN Resident and Humanitarian Coordinator Imran Reza. in a statement on September 13.

The northern and eastern regions of Syria are going through difficult times these days, and the region faces a multi-faceted danger. Food security is threatened, as is health security, so that the region is in the midst of a catastrophe whose consequences will be the title of the next stage.

The spread of cholera and related diseases that come from the polluted waters of the Euphrates will threaten the lives of millions of Syrians, especially as cities like Aleppo, Raqqa, Manbij, Tabqa, Kobani and Deir ez-Zor depend on the ‘Euphrates as a main source of drinking water.

With the weak capacities of the autonomous administration and its health facilities, and the continued closure of the Tel Kojer / Al Yaroubiya crossing to UN humanitarian aid, this will push the situation in the north and east of Syria at a difficult stage which cannot be overcome later.

The decrease in cultivated areas due to the lack of water threatens food security. The drought has caused great damage to the agricultural sector in Syria, and the imprisonment of the waters of the Euphrates by the Turkish occupation state further complicates the situation.

According to the director of the Rojava Dam (Tishreen Dam), Hammoud Al-Hamadin, the water intake on the Turkish side does not exceed 200 cubic meters per second, while the Rojava Dam lake is experiencing a decrease of up to 5 meters .

In his latest statement to our agency, Thursday, September 22, the Euphrates Dam Lake, the largest water lake in Syria, is experiencing a drop of more than 4.5 meters.

Noting that stagnant water provides a breeding ground for bacteria and viruses and the resulting spread of disease outbreaks, he said, “The less stock, the more pollutants.”