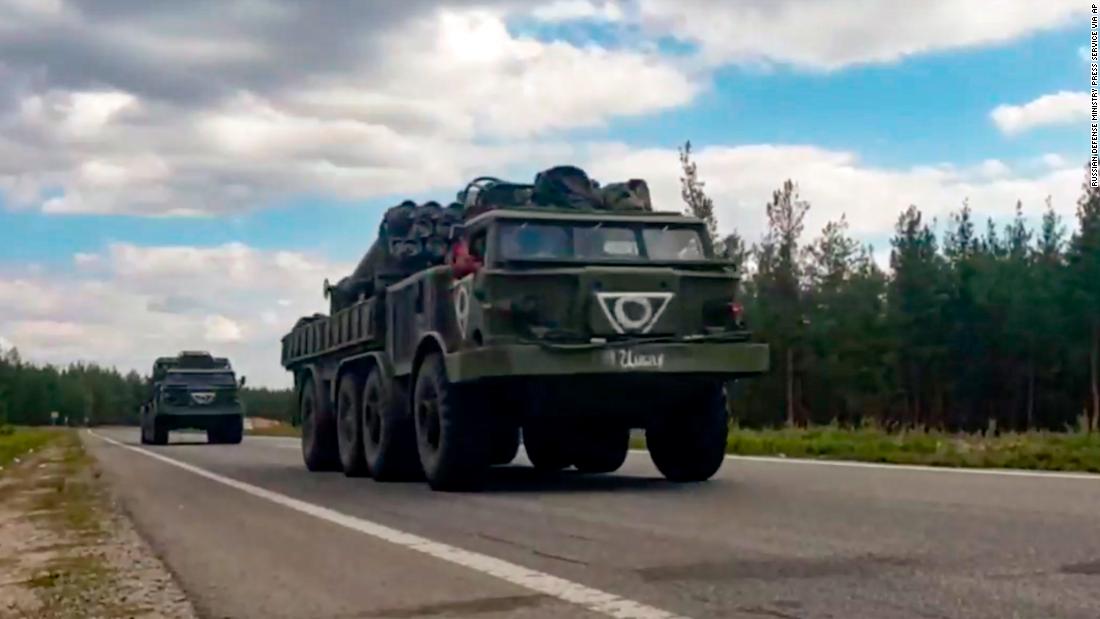 “The Russians escaped and left weapons and ammunition. The city center is free,” a spokesman for the Bohun Brigade of the Ukrainian Ground Forces said on Saturday afternoon.

A senior US official said Ukrainian forces succeeded in attacking Russian supply lines, intending to cut off and isolate Russian troops west of the Dnipro.

Saturday’s rapid advance did not stop at Izium, with Ukraine appearing to have opened a new front against Russian defenses on the border of the Donetsk and Luhansk regions.

Luhansk regional military administration chief Serhiy Hayday said the city of Lysychansk was the target of the new offensive.

Lysychansk was the last town in the Lugansk region of eastern Ukraine to fall under Russian control in July after weeks of heavy fighting. Hayday told CNN on Saturday that “the occupiers, including collaborators and the military, are hastily fleeing.”

“Locals have videos and photos that prove it,” Hayday said. He said visual evidence could not be shared for security reasons. CNN was unable to verify Hayday’s claim, but at least one border crossing into Russia saw lines of vehicles forming.

Oleksiy Reznikov, Ukraine’s Defense Minister, said on Saturday that Ukraine’s allies were “amazed” by the country’s military’s recent successes. Speaking after a meeting of the Ukrainian Defense Contact Group at Ramstein Air Base, Germany, Reznikov said that “Ukraine’s partners were positively surprised by the dynamics of the activities of our troops” in the south and east of the country.

As Russian forces scramble to counter the Ukrainian advance in the east, Moscow tries to reinforce its beleaguered military units there.

Poddubny reported on Friday that the Russian military headquarters was using Mi-26 helicopters to reinforce units in Kharkiv with men and armored vehicles, redeploying reserve troops to Kupyansk and Izium.

But the reinforcements don’t seem to have helped. In a great strategic victory for Kyiv, Izium and Kupyansk were recaptured.

Izium, which lies near the border between Kharkiv and Donetsk regions, had been under Russian occupation for more than five months and had become an important hub for military invaders. Russia was using Izium as a launching pad for southward attacks in the Donetsk and Kupyansk region, about 30 miles north of Izium, as a rail hub to resupply its forces.

Several videos of Ukrainian troops standing in front of the Izium sign at the entrance to the city have been posted on Telegram. A sequence was reportedly filmed by a reconnaissance unit of the Ukrainian 25th Parachute Brigade. On the video, a voice is heard saying: “We are in Izium. Everything will be Ukraine. Our flag is already here.”

Kyiv said his forces had also cut off an important Russian supply line through the Kharkiv region and were moving further east. Meanwhile, the Ukrainian military said casualties were inflicted on Russian forces in the Kherson region of southern Ukraine.

Even the Russian-backed authorities in Izium were forced to admit the retreat on Saturday. According to the Russian news agency RIA, the head of the pro-Russian administration of the city of Izium, Vladislav Sokolov, said that the situation in Izium was “very difficult”.

Sokolov was later quoted by Russian state news agency TASS as saying: “We have started the evacuation, albeit at a slow pace, but as far as possible we are taking them to the territory of the Russian Federation”.

Kirill Imashev, the military correspondent for a Russian Telegram channel, Readovka, said Russian forces had left Kupyansk and retreated across the Oskil River to “regroup”, but claimed residents of the city had “hastily left their homes, fearing reprisals from the Kyiv regime.”

“Hundreds of cars leave from Kupyansk to the LPR [the self-declared Luhansk People’s Republic],” he said.

Evidence available on social media shows that the civilian population in the liberated areas enthusiastically welcomed the Ukrainian forces. Ukrainian officials have vowed that anyone who collaborates with the occupation forces will face criminal penalties.

Ukraine has said some Russian troops are now deserting due to “heavy losses” they have suffered. The General Staff of the Armed Forces of Ukraine said on Friday that at least 15 desertions had taken place. He said soldiers were ditching their uniforms and wearing civilian clothes in a bid to blend in while trying to return to Russian territory, he said.

Meanwhile, Moscow was trying to paint a different picture of the Ukrainian advance.

In its first response to the gains made by Ukrainian forces in recent days, the Russian Defense Ministry said that “the decision has been taken to consolidate Russian troops in Balakleya and Izyum regions and redirect their efforts to Donetsk”. .

Advancing Ukrainian troops have reported scenes of destruction as they retake areas under Russian control.

The head of the Kharkiv region’s military administration, Oleh Syniehubov, said he visited recently liberated areas where the Russians had “left broken infrastructure and houses, many trophies and heaps of garbage”. , and posted photos of the scenes on Telegram.

“People, without exaggeration, met our soldiers with tears in their eyes,” Syniehubov said. “The inhabitants, of course, need help. Most of the villages have no electricity or gas. In the near future, we will restore them and provide humanitarian aid.”

Ukrainian President Volodymyr Zelensky said negotiations with the Russian Federation over an end to the war are currently “impossible” as he attended the annual European strategy meeting in Yalta in Kyiv on Saturday.

“The Russians are not ready to admit that they have occupied our country. This means that there will be no substantial dialogue,” Zelensky said. “For us to open a diplomatic corridor with [Russia]they must show a political will, that they are ready to make the land foreign.”

Redefining the role of HR leadership in redesigning work