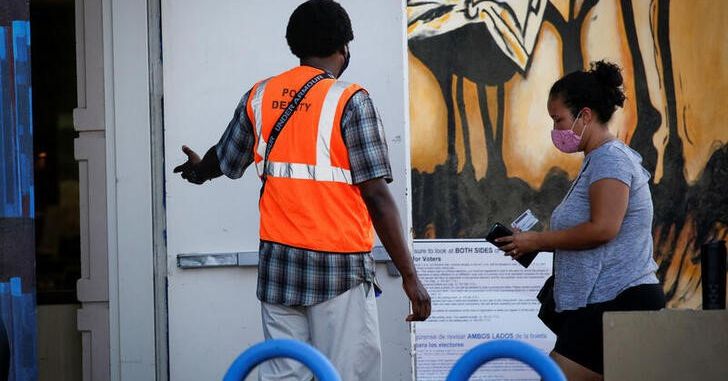 A poll worker assists a voter outside the John F. Kennedy Library during the primary election in Hialeah, Florida, U.S., August 23, 2022. REUTERS/Marco Bello

(Reuters) – The U.S. Justice Department was sued on Thursday by a government watchdog group seeking public documents about the task force the agency set up last year to deal with growing threats of violence against election workers and state election administrators.

Citizens for Responsibility and Ethics in Washington (CREW) filed the suit in the U.S. District Court for the District of Columbia. The lawsuit seeks details under the Freedom of Information Act on how many tips the task force received and how many cases were opened or closed.

CREW is also seeking submissions from U.S. Attorney General Merrick Garland and Assistant Attorney General Lisa Monaco about the department’s work under its Election Threats Task Force and the identities of members of the Investigative Committee.

CREW’s attorneys said they were looking for records to show public actions the task force has “both taken and has not taken to date.”

A Justice Department spokesperson did not immediately respond to a request for comment on the filing on Thursday.

A CREW spokeswoman said the requested documents will provide “a better understanding of the legal and investigative actions the DOJ is pursuing to protect them in this election cycle, as well as in future elections.”

The task force said in a statement Aug. 1 that it had reviewed, so far, more than 1,000 “hostile or harassing” contacts involving election workers, and that 11% of those cases warranted a criminal investigation.

The statement said the task force has indicted four cases and that the panel “anticipates additional prosecutions in the near future.”

The Justice Department said it is “committed to responding aggressively to threats of violence directed at state and local election officials.”

In a recent case, a Nebraska man pleaded guilty in June to posting threatening messages on Instagram against an election official. Sentencing is scheduled for October 6 before U.S. District Judge John Gerrard in federal court in Lincoln.

The case is Citizens for Responsibility and Ethics in Washington v. US Department of Justice, US District Court for the District of Columbia, No. 1:22-cv-02563.

For CREW: Anne Weismann and Adam Rappaport from Citizens for Responsibility and Ethics

For the DOJ: No appearance yet

Campaign of Fear: The Trump World’s Assault on US Election Workers