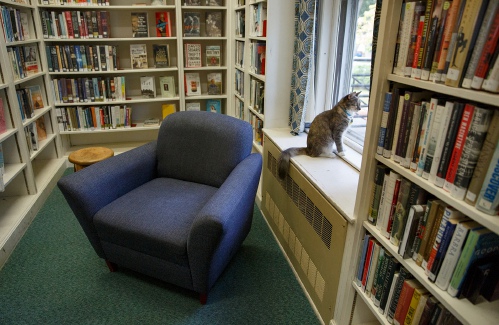 Valley News – Out & About: Newport, NH, the two cats in the library are worth a visit

The Richards Free Library in Newport is a magnificent building. The three-story Colonial Revival style home has large curved windows and intricate moldings under other windows on the third floor that overlook downtown Newport. Inside, the space welcomes natural light. A dark curving staircase and a massive fireplace on the first floor remind you that it was once a family home.

The building, which also houses the Library Arts Center, is without a doubt one of my favorites in the Upper Valley.

And now there is another reason to visit. Meet Dexter and Minerva, the two new library staff and, in my research, the only library cats in the Upper Valley. (If there are more, let me know. I would love to meet them.)

â€œCats are definitely the talk of the town right now,â€ library director Justine Fafara told me when I visited on Tuesday.

Since the cats arrived, some people have stopped by to meet the cats and obtained library cards as a result.

Minerva, a Maine Coon mix, is around 9 months old and Dexter, a short-haired tabby, is around 3 years old. Patrons and others on social networks were able to vote on their names. Minerva – named after Professor Minerva McGonagall, a Harry potter character who can turn into a tabby cat – is a bit shy and tends to avoid places in the library where things can get loud, like children’s story times. Dexter, named after library founder Dexter Richards, is more outgoing.

“He’s like the mayor of the library,” Fafara said as Dexter greeted me when I visited last Tuesday. â€œHe loves meeting everyone.

The cats’ home since they joined the staff has been Deputy Director Sally Bernier’s office, where there is litter, food and a plethora of toys, including purple boas that hang from the handles of filing cabinets. They wear bells on the collar to inform visitors of their presence.

A sign on the front door of the library reads: “Be careful not to let the cats out!” (It doesn’t matter what they tell you). A cat tree, donated by a patron, is located nearby in the foyer. The fireplace now houses a unicorn-themed cat bed topped with a sparkling horn.

No taxpayer money will be spent, and cat care money will come from Friends of the Library in addition to donations. A donation jar is on the main desk for anyone wishing to help with cat care.

The library even has an official job description with eight bullet points. The first is to “reduce stress for humans”; the last is â€œfundraising helpâ€.

â€œEveryone’s biggest concern is allergies,â€ said Fafara. Yet there was only one complaint.

The library is 16,000 square feet and cats have access to it, except for a computer room where they are not allowed. During the pandemic, the library also upgraded its HVAC system, which allowed for better air circulation. Customers with allergies can also call ahead and request that cats be transferred to library staff offices, or request that any books they wish to view be cleaned.

The idea of â€‹â€‹having a library cat came from Molly DiPadova, a student who works summers at the library as an assistant, and who had been looking for a cat since her days as a high school library page.

â€œCats and books seem to go well together for me,â€ said DiPadova.

When Fafara started her role as library manager last March, she was open to the idea, but wanted to do her research first. The board of directors provided support. The same goes for the library’s insurance company, which said any cat-related injury would be treated like any other claim.

â€œThis, I thought, was going to be our stumbling block,â€ Fafara said of the insurance issue.

DiPadova documented the process on the library’s TikTok page in a series of short, humorous videos. The first shows that she asks Fafara to have a cat. The following videos show the name contest, a visit to the shelter, and the cats settling into their new roles.

â€œThe staff were completely on board,â€ said Fafara. â€œEveryone on our team loves cats. We certainly wouldn’t have gotten out of it without their 100% membership.

Once they got their approval, Fafara and DiPadova traveled to the Springfield (VT) Humane Society to meet Minerva, where she was in a room with Dexter, to whom she was clearly attached.

“How to divide them? Fafara recalled a thought which was followed by “We can’t go home with two cats.” I’ll be in trouble if I bring two cats back.

Fafara followed her instincts and picked up the bound couple. After seeing them wrestle on Bernier’s floor, “it was definitely the right decision,” she said. Dexter and Minerva keep each other company at night when the rest of the staff return home.

â€œWe’ve had so many people seeing on Facebook that we have cats and they’ve never been in the library before,â€ DiPadova said, including families.

It was the first time the Springfield Humane Society had a request for library cats, said Anne Eddy, executive director of the nonprofit.

â€œWe think it’s wonderful. That’s where they belong, â€Eddy said. â€œIt works for everyone. Cats are given all the attention they could ask for, and someone we know will be responsible for them. For me, it adds so much charm and character to any place.

Dexter and Minerva aren’t the only New Hampshire library cats, although they are among the few. Louie has been the resident library cat at the Freedom Public Library in Carroll County for most of his 18 years and is now semi-retired. Louie lives across the street with her owner, Library Director Elizabeth Rhymer, who herself is retiring.

â€œThey are so happy to see him. It’s not just the kids, it’s the adults, â€Rhymer said. â€œThere are people coming in and saying, ‘Where’s Louie?’ ”

When he first joined the staff around 2004, someone lodged an anonymous complaint with the board, voicing concerns that Louie would be destructive and worried about people with allergies. This prompted a group of girls to start a petition in favor of Louie, and the administrators decided to put a sign on the door informing customers when Louie was in residence.

â€œNo one has ever complained and everything has always gone well,â€ said Rhymer. “Sometimes people with allergies love it the most.”

In his youth, Louie lounged on the main desk and greeted customers as they entered. Now he is going deaf and having trouble jumping as high as before.

One of the reasons staff at the Richards Free Library decided to adopt Minerva and Dexter was the COVID-19 pandemic. Like other organizations in the region, library staff had to adapt services when the doors were physically closed and then, once reopened, how to ensure the safety of the space for patrons. The cats – and the joy they brought to customers and staff – helped reduce stress.

While researching for this column, I reached out to Amy Lappin, former president of the New Hampshire Library Association and deputy director of Lebanon’s public libraries, to ask if she knew of any other libraries in the area with cats. She posed the question to a mailing list of a New Hampshire librarian and although Lappin could not find any other cats, she discovered that:

â–  The Pope Memorial Library in North Conway has two dogs who do not live in the library, but work there for food three to four days a week.

â–  The Oscar Foss Memorial Library in Barnstead has two guinea pigs who live in the library and a neighborhood cat who visits it often.

â–  The Exeter Public Library has a guinea pig named Dewey and a turtle named LC.

â–  The Mary E. Bartlett Library in Brentwood has a saltwater aquarium maintained by a generous patron who donated the aquarium, supplies and ongoing care.