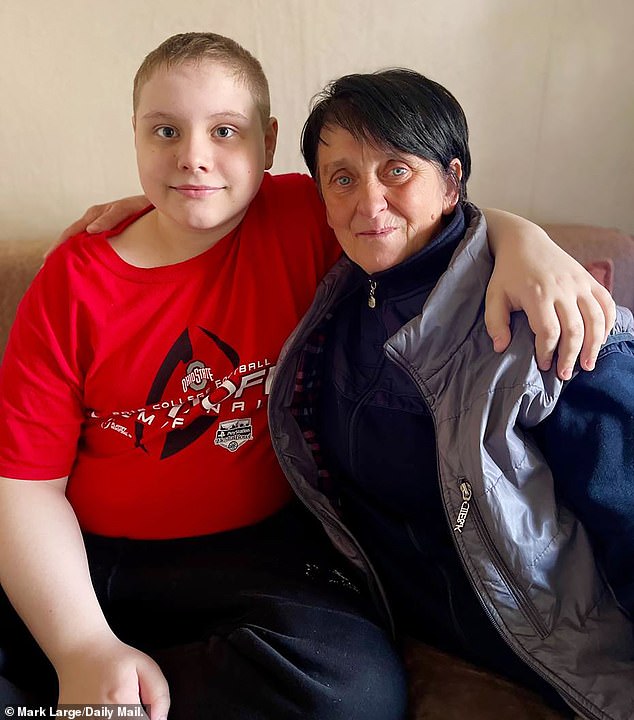 Why your Mail Force food parcels are so important: Ukrainians are forced to scour trash cans for food scraps

Why your Mail Force food parcels are so important to starving civilians: Ukrainians in areas under Russian occupation or bombardment are forced to scour trash bins for leftovers

Ukrainians in areas under Russian occupation or bombardment have been forced to scour trash cans for food.

That’s why Mail Force Ukraine’s record appeal and the Ukrainian Embassy in London are sending 500,000 boxes of humanitarian food aid worth £8million to end the suffering of innocent people.

Grandmother Natalya Boyko, 61, worked as a chef and baker before the Russian invasion of her homeland – during which the Kremlin was accused of weaponizing hunger.

kyiv baker Natalya Boyko, 61, is raising her 12-year-old grandson Danilko on her own. They fled Bucha

She and her 12-year-old grandson Danilko, whom she raised alone, managed to flee their home in Bucha, where some of the worst atrocities took place, to Kyiv after Vladimir Putin’s forces withdrew from the city .

The Russians had blocked supply deliveries from entering Bucha.

Speaking from the relative safety of the capital, Miss Boyko said: ‘We had no money. There was nothing in the way of food. We took bags and looked for food in the garbage cans.

“The first time we tried to leave, the evacuation convoy ahead of us got shot.”

Her story was echoed by many locals who suffered under the Russian occupation, who described limited access to food and water.

Miss Boyko left Bucha with just 300 Ukrainian hryvnia in cash, or just under £8.

She said: “When I first went shopping in Kyiv, the supermarket manager had to help pay for the groceries. Then we asked for help from some local voluntary organizations.

She said humanitarian aid funded by the generosity of Daily Mail readers would be “a huge help” for Ukrainians suffering from food shortages due to Putin’s brutality.

That view is shared by Dmytro Stepnov who called the record-breaking campaign – which sees all donations going to charities and relief organizations – an “extraordinary show of support” for Ukrainians.

“People there may not know who helped, but I can assure you they are very, very grateful to you,” he said in an interview from Kyiv.

The father-of-two described his “good life” in Mariupol before Russia attacked last month.

He served as president of the city’s rowing federation and participated in powerlifting competitions in his spare time.

“The needs of people in my hometown are as basic as you can imagine,” he said. “Just to be able to eat, drink, be warm and safe.”

He and his wife Yulia had to strictly ration their meal portions before escaping to the Ukrainian capital. “When we were in Mariupol, food was calculated for each day, for each meal,” Stepnov explained.

The 36-year-old now works with a humanitarian volunteer organization in Kyiv.

“There are long queues for humanitarian goods all over these towns. There are people living below the poverty line,” he said.

The Mail Force Ukraine appeal – which has now raised more than £11million – has also been hailed by Boris Johnson and Ukrainian President Volodymyr Zelensky.

Donations have already gone to help Ukrainian refugees who have fled the conflict, or those still in their homeland under constant threat of bombardment from Russian invaders.

The appeal was launched with a donation of £500,000 from the newspaper’s parent company DMGT at the request of chairman Lord Rothermere and Lady Rothermere.

Candidates for the position of public health officer interviewed, selection next week