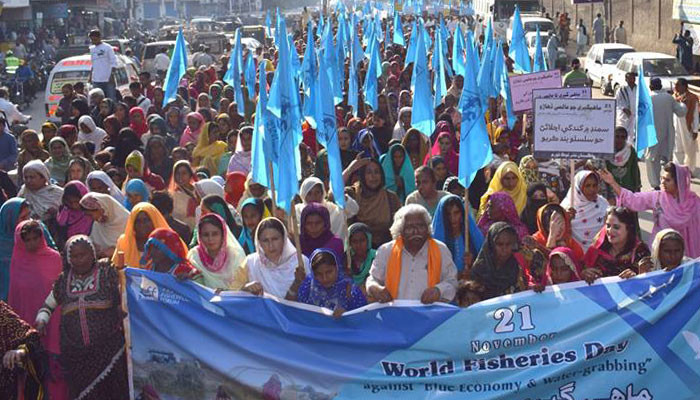 On World Fisheries Day, celebrated on November 21 each year, participants in a cultural gathering on Sunday pledged to protect the rights of the fishing community and called on the government to end the occupation. of the province’s freshwater bodies and lakes by influential owners and owners. political figures.

The Pakistan Fisherfolk Forum (PFF) had organized the rally which started from Regal Chowk and ended at the Karachi Press Club. Representatives of civil society, women and trade unions participated as well as a large number of members of the fishing community, including women, from various districts and coastal areas.

The rally aimed to highlight the social, economic and livelihood issues of the fishing community and demanded that the ruling parties make efforts for the betterment of the community.

They said that due to bad government policies, the fishing community had faced a number of serious problems, including increased marine pollution and unconventional and non-traditional fishing practices using destructive nets and deep-sea trawlers, which had ruined the ecosystem and greatly affected the livelihoods of fishermen.

Participants also demanded that the Sindh government restore the right of fishermen to fish in the lakes and eliminate the illegal occupation of the province’s 1,209 freshwater lakes and ponds.